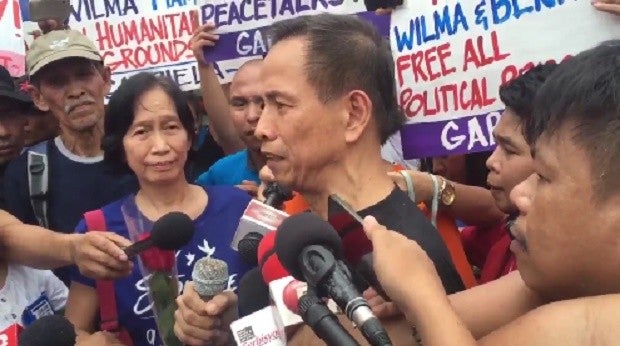 The Office of the Presidential Adviser on the Peace Process (Opapp) on Friday said the release of National Democratic Front (NDF) peace consultants Benito and Wilma Tiamzon was a sign of President Rodrigo Duterte’s sincerity in his bid to solve the decades-old communist insurgency.

Opapp said the couple were the last among detained ranking members of the NDF who were temporarily released to join the peace talks between the government and the Communist Party of the Philippines (CPP) in Oslo, Norway next week.

“With their release, in addition to more than a dozen of NDF consultants earlier granted bail and already freed, one more stumbling block is removed.  We are looking forward to a fruitful but intense negotiations in Oslo,” Presidential Adviser on the Peace Process Jesus Dureza said in a statement.

Peace talks with the NDF, CPP’s political arm, have been stalled since 2012 due to disagreements between the government and the NDF panel.

The government, when it captured the Tiamzons last year, claimed that Benito was the chairman of the CPP and Wilma was the secretary general.

Before he won the elections, Duterte promised to make peace with the Left, which he has close ties with. However, recent events have caused both parties to question each other’s good will. It was eventually resolved when the government pushed through with its promise to release political prisoners.

The Opapp said the release of political prisoners involved in the peace talks, which will start on August 22, will undergo regular judicial procedures. Twenty-two NDF consultants have already been issued Philippine passports.

READ: Duterte: All NDFP consultants will be in Oslo for peace talks

The Philippine delegation will leave for Norway on Saturday. RAM/rga