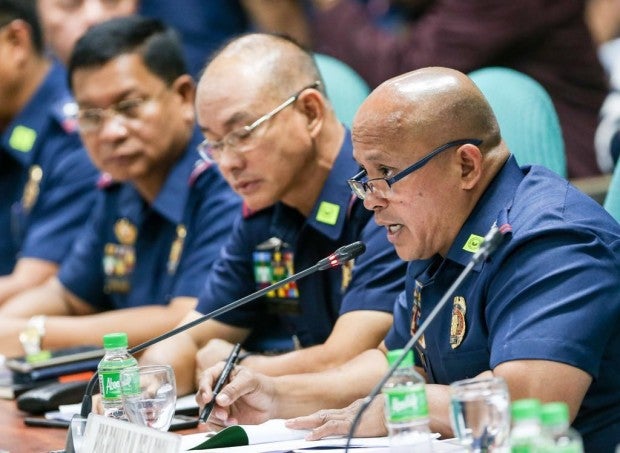 The Philippine National Police (PNP) has placed the total number of persons killed in “legitimate operations” at 665, its head told a Senate hearing on Thursday.

But PNP chief Director General Ronald “Bato” dela Rosa said the total number of deaths “under investigation” from July 1 to August 15 was now  899.

“As of July 1 to August 15, we have a total number of deaths under investigation [at] 899,” Dela Rosa said, responding to Senator Grace Poe’s query during a hearing of the Senate committee on public order.

“Hindi pa po kasama diyan yung mga vigilantes na nai-report po sa inyo? So mga ilan pa ang vigilantes (The number of vigilante killings reported to you is not included there? So how many are vigilante [killings])?” Poe asked again.

“We cannot really attribute this to vigilante [killings] but they are dead bodies under investigation,” the PNP chief said.

Out of the 899 deaths, Dela Rosa said 22 cases have already been filed in court.

While she thanked the police for their cooperation and the success of their campaign against illegal drugs and criminality, Poe reminded them to maintain the rule of law and ensure that the rights of every individual are protected.

After all, she said, it is the job of the police to protect the citizenry.

Poe also took the opportunity to ask about the PNP chief’s stand against a civilian heading the PNP’s Internal Affairs Service (IAS).

“As of now your honor, I find it necessary to maintain a police officer as the head of the Internal Affair Service because of the reason that a lot of police officers and senior police officers are involved in the illegal drug trade and If I put a civilian head in the IAS, madali pong i-threaten ang civilian baka hindi makalaban dun sa pulis na mga scalawags (a civilian could easily be threatened and he might not fight against the police scalawags),” said Dela Rosa.

“I have no question about the credibility of the person who’s heading the IAS now because I don’t really know him yet. Ang punto po dito ay nasa batas po na talagang nakalagay, civilian ang dapat (The point is it is stated in the law that a civilian should head the [PNP’s IAS]),” said Poe.

“Yung nakaraang administrasyon, ang tagal na po namin silang kinausap ukol dito, hindi po nila pinalitan kaya nga po umaasa kami (We have talked to the previous administration about it but they failed to address it that’s why), we remain hopeful that with this new administration it will be such. I understand your concern, na baka nga hindi makaya ng isang sibilyan ang kultura ng pulis pero hindi po iyon ang nakasaad sa batas…(that a civilian may not be accustomed to the police culture but that is not according to the law)” the senator added.

Dela Rosa later expressed his readiness to appoint a civilian as IAS head once the PNP has cleansed its own ranks.

“Kapag medyo nag-settle na po kami, kapag na-address na po namin itong problema namin sa bulok na aming hanay ay ipapasok na po namin yung sibilyan kapag medyo ito’y nawala na (Once we are settled and once the PNP has cleansed its own ranks, I could appoint a civilian), but if you really want that to happen, right away, ito (this), ma’am, I can appoint a new IAS,” he said. RAM/rga