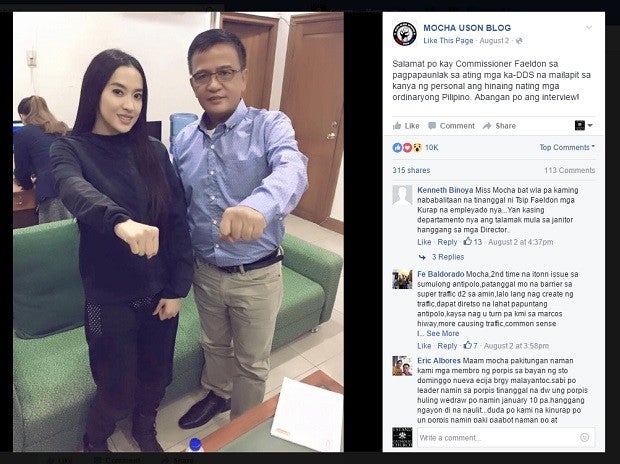 The Bureau of Customs (BOC) will not be hiring Mocha Uson, a staunch supporter of President Rodrigo Duterte, as a consultant of the agency.

The Bureau of Customs (BOC) on Thursday issued a denial over its Twitter account after ABS-CBN News reported that Commissioner Nicanor Faeldon would be appointing Uson as the bureau’s social media consultant.

“Comm. Nicanor Faeldon will not appoint Mocha Uson as BOC Social Media Consultant but she can write articles about BOC on her blog,” the statement read.

“She will be the social media consultant,” Faeldon was quoted in the report.

The news sent social media into a tizzy as netizens questioned her qualifications for the job.

Uson manages “Mocha Uson Blog,” a Facebook page which has about four million followers. She campaigned vigorously for Duterte during the campaign period, endearing her to the President’s supporters whom she calls “Ka-DDS” or “Duterte Die-hard Supporters.”

The report of Uson being appointed to the BOC came after some celebrity supporters of Duterte have been appointed to government posts.

Recent celebrity appointees include singer Jimmy Bondoc as assistant vice president for entertainment for the Philippine Amusement and Gaming Corp. (Pagcor), host Arnell Ignacio as assistant vice president for the Community Relation and Services Department of Pagcor, and musician Ramon “RJ” Jacinto as Presidential Adviser on Economic Affairs and Information Technology Communications with the rank of Undersecretary. AJH/rga