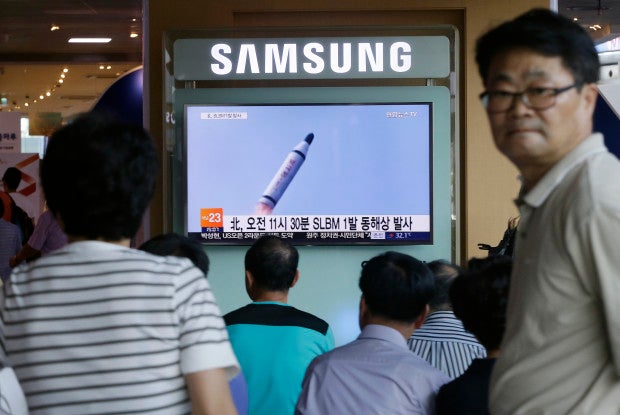 People watch a TV news program showing a file footage of North Korea’s ballistic missile that the North claimed to have launched from underwater, at Seoul Railway station in Seoul, South Korea, Saturday, July 9, 2016. North Korea on Saturday fired what appeared to be submarine-launched ballistic missile off its eastern coast, the U.S. and South Korea said, in the latest test that’s part of efforts by the North to advance technology capable of delivering nuclear warheads. AP

The Joint Chiefs of Staff said in a statement that the missile was launched toward the waters off the North’s east coast.

North Korea routinely conducts missile and other weapons tests, but Wednesday’s launch came after North Korea made angry threats against a U.S. plan to deploy an advanced missile defense system in South Korea by the end of next year.

US to deploy missiles in S.Korea as North riled