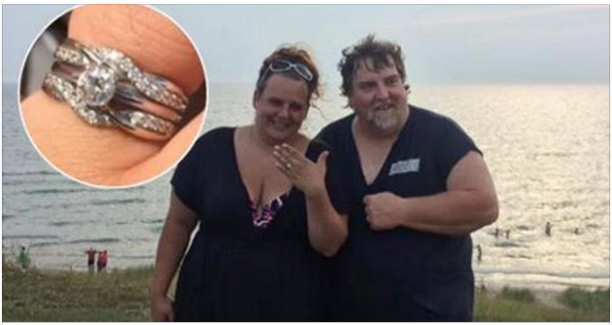 John Dudley (right) poses with Jamie Kennedy after he recovered her wedding ring (inset) from the bottom of Lake Michigan. Kennedy described the recovery as a ‘miracle’ and thanked Dudley for his generosity. PHOTO COURTESY OF JOHN R. DUDLEY

SOUTH HAVEN, Michigan, United States — Jamie Kennedy needs to make room for another wedding guest: the man who found her engagement ring in the bottom of Lake Michigan.

John Dudley, the president of a metal detector club in western Michigan, fought strong waves and scooped up the ring after getting a signal. His reaction? “Oh, my gosh.”

The discovery was made in late July, two days after Kennedy lost the ring while trying to wash sand off her fingers at the beach in South Haven. She says she was “sad, sick and disappointed.”

WZZM-TV reports that Dudley reached out to Kennedy, a Decatur resident, and offered his services. Kennedy says she “practically walked on water” when Dudley gave her a thumbs-up to indicate that he had found it.

She says “miracles can happen.”

While AP reported that the ring was for engagement, Dudley told INQUIRER.net that “It’s actually both. The engagement part is the part with the diamonds. The wedding band is the solid ring.”