US to deploy missiles in S.Korea as North riled | Inquirer News

US to deploy missiles in S.Korea as North riled 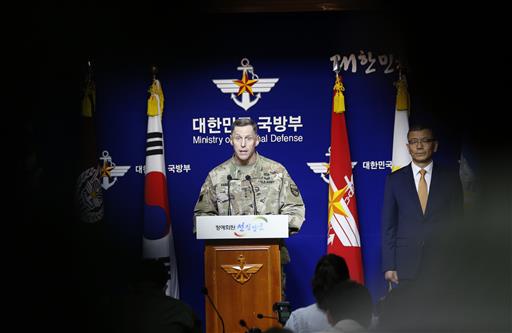 SEOUL—The United States is to deploy an advanced missile defense system in South Korea, the two sides said Friday, as North Korea warned the latest US sanctions against its leader amounted to a “declaration of war”.

News of the unprecedented sanctions targeting Kim Jong-Un came as North Korea marked 22 years since the death of its founding president Kim Il-Sung, grandfather of the current “Supreme Leader”.

Tensions have soared since Pyongyang carried out its fourth nuclear test in January, followed by a series of missile launches that analysts said show the North is making progress toward being able to strike the US mainland.

The US and South Korea began talks on deploying the Terminal High Altitude Area Defense system, or THAAD, to the Korean peninsula in February after the North launched a long-range rocket.

“Based on these consultations, the (South) and the US made an alliance decision to deploy THAAD… as a defense measure to ensure the security of the (South) and its people,” the allies’ defense ministries said in a joint statement.

It did not reveal exactly when and where in the South the system would be deployed, saying the two nations were in the final stages of selecting a potential venue.

China — the North’s most important ally — lashed out at the move, which it said would “seriously damage” regional security in northeast Asia, and urged the US and South Korea to reconsider.

The plan to deploy the powerful system, which fires projectiles to smash into enemy missiles, has irritated Beijing and Moscow, which described it as a bid to flex US military muscle in the region.

The US on Wednesday placed “Supreme Leader” Kim on its sanctions blacklist for the first time, calling him directly responsible for a long list of serious human rights abuses.

Pyongyang lashed out at Washington on Friday, warning North Korea would instantly cut off all diplomatic channels with the US if the sanctions were not lifted.

“This is the worst hostility and an open declaration of war against the DPRK as it has gone far beyond the confrontation over the ‘human rights issue,'” the foreign ministry said in a statement carried by its official KCNA news agency.

“Now that the US declared a war on the DPRK, any problem arising in the relations with the US will be handled under the latter’s wartime law.”

Kim, who took power four and a half years ago after the death of his father Kim Jong-Il, is the subject of a personality cult that permeates every aspect of life in the repressive state.

At midnight, Kim went to pay his respects at the giant mausoleum for his grandfather and father.

During the day, thousands of somberly-dressed party, government and military officials bowed and filed past the cases containing the embalmed bodies of the two late leaders.

In the meticulously-manicured gardens outside the mausoleum, tens of thousands more — including students, soldiers and office workers — lined up to bow to giant portraits of the two Kims that dominate the facade of the building.

While the US sanctions naming Kim Jon-Un were more symbolic than substantive, the foreign ministry’s angry reaction reflected North Korea’s hyper-sensitivity to any personal attack on the ruling Kim family dynasty

North Korea often issues bellicose statements against the US, but the reference to “wartime law” is rare and analysts warned of more sabre-rattling to come over the sanctions.

“There will be a bombardment of diatribes from North Korea against the US as the military, government agencies and various social groups are likely to fall over themselves to prove their loyalty to Kim”, Professor Yang Moo-Jin of the University of North Korean Studies told AFP.

China also condemned the latest round of US sanctions, saying it opposed “public pressure, confrontation and one country’s imposing unilateral sanctions on another country by citing domestic laws”.