6 dead in anti-drug raid of Espinosa house in Leyte 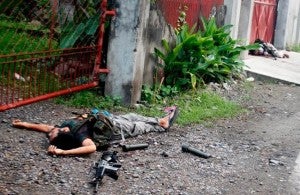 At least 6 hired men of Albuera, Leyte Mayor Rolando Espinosa Sr. were killed by police who raided the Espinosa house in Leyte. Mayor Espinosa and his son Kerwin have been accused of running drug manufacturing and trafficking operations in Visayas. (ROBERT DEJON/INQUIRER VISAYAS)

Two police teams went on patrol outside the Espinosa compound about 4:30 a.m. after receiving a tip that there was “movement” inside the gated residence of the mayor and his son, Kerwin, who was still at large, as of this posting.

An exchange of the gunfire ensued when one of the two armed men guarding the gate allegedly fired at the policemen.

Radyo Inquirer 990 AM earlier reported that police were on patrol when they received a call about armed men at the house of the mayor, who surrendered to PNP Director General Ronald “Bato” Dela Rosa on Tuesday (Aug. 2).

The Albuera Police immediately went to the mayor’s house and a shootout ensued.

Among those who shot it out with the police were two bodyguards of Kerwin Espinosa, the son of the Albuera mayor, who has been tagged as his father’s partner in crime and his replacement when the mayor started planning for his mayoral campaign at least two years ago. 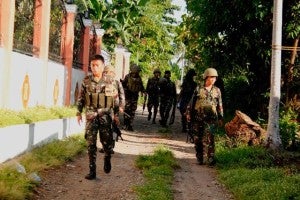 Police in full battle gear, in Albuera, Leyte, take control of the house of Mayor Rolando Espinosa Sr. Mayor Espinosa and his son Kerwin, have been accused of running drug manufacturing and trafficking in the whole of Visayas. (Photo by ROBERT DEJON/INQUIRER VISAYAS)

The Albuera police said that the gunmen at the mayor’s house were using branded high-powered firearms.

The standoff between the Albuera police and the armed men at the Espinosas’ home continued, as of this posting.

Police estimated there were 50 to 100 armed men inside the residence, as of Wednesday morning.

On Tuesday, Mayor Espinosa surrendered to the PNP and admitted he and his son, Kerwin, have been manufacturing and trafficking shabu (methamphetamine hydrochloride) from their base in Albuera town, Leyte. 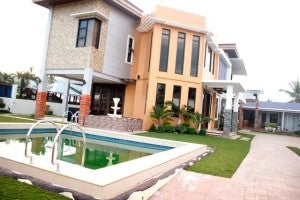 The upscale house of Albuera, Leyte Mayor Rolando Espinosa Sr. has become the site of bloodshed as police raid the residence on Aug. 3, 2016. Mayor Espinosa and his son, Kerwin, have been accused of running drug manufacturing and trafficking operatons in the Visayas. (Photo by ROBERT DEJON/INQUIRER VISAYAS) 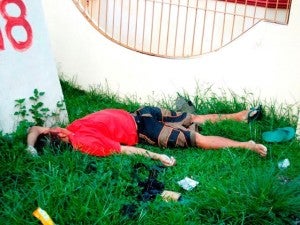 Another gunman employed by Albuera, Leyte Mayor Rolando Espinosa Sr. lies dead at the family compound after a police raid of the place on Aug. 3, 2016. Mayor Espinosa and his son, Kerwin, have been accused of running drug manufacturing and trafficking operations in the Visayas. (Photo by ROBERT DEJON/INQUIRER VISAYAS)