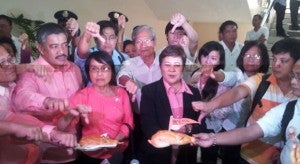 Zarate said the Makabayan legislators, who all came from militant activist groups before joining Congress via the partylist system, would strongly urge Alvarez “to reconsider his stance favoring Con-Ass (Constituent Assembly) as the mode for amending the Constitution.”

Zarate said the Makabayan group has expressed openness to Charter change but they have always been opposed to a Constituent Assembly because that would give the dominant traditional parties controlled by political dynasties and the economic elite a chance to shape the discussion on Charter change and again marginalize sectors who should benefit from the envisioned changes in the Constitution.

Zarate claimed that a Constituent Assembly would also not be acceptable to the people who would perceive the entire exercise of constitutional amendments as something dominated by political dynasties prevailing in Congress.

Zarate posted a statement by Makabayan Bloc, which said that Con-Ass has become unpopular as evidenced by the “public outcry…particularly on social media” amid massive fears that “vested and self-serving interests” would inevitably influence proposed changes to the Constitution.

“Makabayan will strongly oppose any effort to revise the Constitution that will do away with its protectionist economic provisions, remove the anti-dynasty clause and lift term limits of elected officials,” the statement added.

Zarate clarified that the Makabayan bloc would support Charter Change done through other means acceptable to Filipinos.

In the statement, Makabayan said the changes should “empower the poor and the oppressed, recognize the rights of national minorities, enshrine national industrialization and genuine agrarian reform, and promote equitable distribution of wealth.”

“We thus urge Speaker Pantaleon Alvarez to reconsider his stance favoring Constituent Assembly as the mode for amending the Constitution,” the Makabayan Bloc said.

An alternative to a Constituent Assembly is the Constitutional Convention wherein delegates will be elected by the country’s voters at large.

President Duterte has strongly pushed for the shift in the form of government from the unitary presidential system to a federal system that would be a mix of the presidential and parliamentary systems applied in Europe.  Duterte’s exact federalism model has yet to be articulated.  But some constitutional law experts interested in federalism have generally proposed turning regions into federal states that will have powers to plan, manage and decide on their economic development and would have equitable shares of tax collections derived from the economic activities within their jurisdictions.  Speaker Alvarez is the President’s trusted lieutenant in Congress, who is expected to pursue Duterte’s legislative agenda in the House of Representatives

Alvarez claimed President Duterte has warmed up to the idea of convening Congress into a Constituent Assembly to discuss constitutional amendments.  SFM/rga