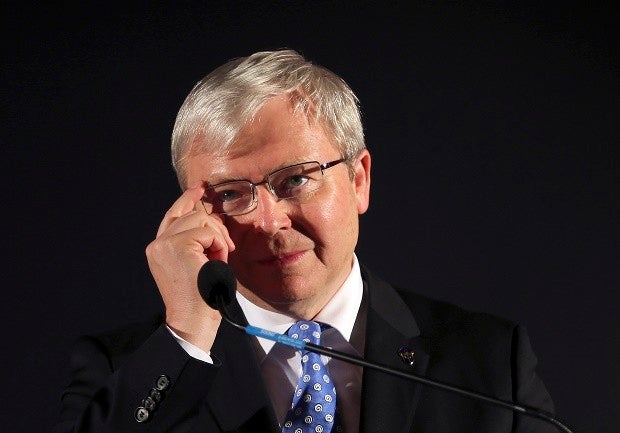 In this Sept. 6, 2013, file photo, former Australian Prime Minister Kevin Rudd adjusts his glasses during a speech at a pre-election rally in Mt. Druitt, Australia. Australia’s government has rejected a request by Mr Rudd that it back his late bid for the top United Nations job. The decision by Prime Minister Malcolm Turnbull on Friday July, 29, 2016 effectively crushes Rudd’s hopes of nabbing the post after he spent months lobbying for government support. AP FILE PHOTO

SYDNEY — Australia’s government rejected a request by former Prime Minister Kevin Rudd on Friday that it back his late bid for the top United Nations job, effectively crushing the former diplomat’s hopes of nabbing the post after he spent months lobbying for government support.

But Prime Minister Malcolm Turnbull said he didn’t feel Rudd was qualified for the job and would not support his bid.

“There is a fundamental threshold point and it is this: Does the government believe, do we believe, do I as prime minister believe that Mr. Rudd is well suited for that role? My considered judgment is that he is not,” Turnbull told reporters.

Turnbull declined to explain why he felt the former leader of the opposition center-left Labor Party was an unsuitable candidate, but said his decision was not motivated by political partisanship.

Rudd, a Chinese-speaking former diplomat who also served as Australia’s foreign minister, was a polarizing figure within his government and nabbing the support of some of his one-time colleagues was always going to be tough. He was elected prime minister in 2007, but was dumped by his own party in 2010. He was dubbed “Recycled Rudd” when he regained control of the chaotic and divided government weeks before Labor lost elections in 2013. Some former ministers swore they would never work with him again because of his erratic management style.

Even had he received the backing of Australia, Rudd was considered a long-shot for the post. Portugal’s former prime minister Antonio Guterres recently topped the UN Security Council’s first informal poll of candidates vying for the job, followed by Slovenia’s former president Danilo Turk.

Rudd had no immediate response to Turnbull’s decision, though he was expected to release a statement later Friday.

READ: UN to hold informal poll on 12 candidates for next UN chief