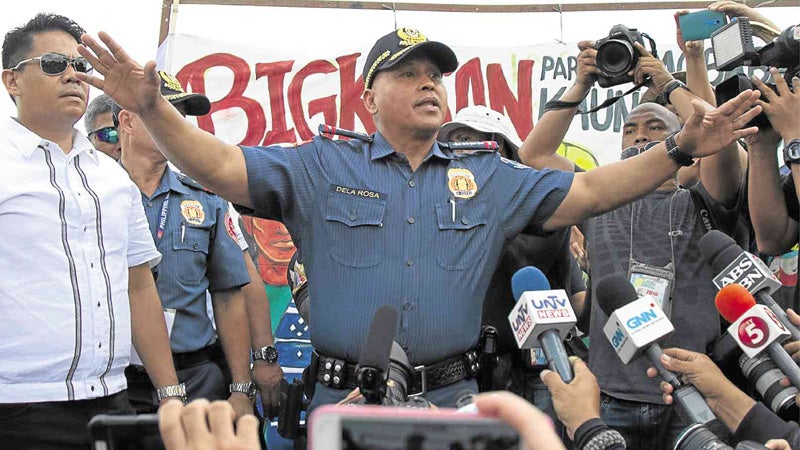 ON SAME STAGE Philippine National Police Director General Ronald dela Rosa is on the stage set up by activists to assure them that the police would not harm or shoo them away hours before the start of President Duterte’s first State of the Nation Address. ALEXIS CORPUS

Vehicles passed by the country’s widest highway unimpeded on Monday.

Nowhere were the concrete barriers, barbed-wire fences, container vans and fire trucks that usually dot the landscape to block protesters every time the President delivers a State of the Nation Address (Sona) at the Batasang Pambansa complex in Quezon City.

This time, the militants marched on to their destination near the legislative building, undisturbed by the flanks of a few hundred policemen with lowered truncheons and shields and uncowed by the concrete barriers serving as dividers.

The burning of effigies of previous Presidents—the highlight of every Sona rally—was a forgotten routine.

For the first time in more than 10 years of Sona protests, Commonwealth Avenue did not resemble a battle zone.

“It’s possible for the police to allow us to hold our rallies minus the war zone. This is a historic Sona rally,” said Renato Reyes Jr., secretary general of the militant Bagong Alyansang Makabayan (Bayan).

Reyes placed at 30,000 the number of demonstrators who came for President Duterte’s first Sona. Unlike rallies in the past, they were allowed to hold their program on Batasan Road, just 300 meters away from the legislative building.

Smaller protests at the rear were held by groups, such as the Partido ng Manggagawa and the People’s National Movement of Federalism, and even those calling for the legalization of marijuana.

An unlikely sight during previous protests, the chief of the Philippine National Police, Director General Ronald “Bato” dela Rosa, joined the leftist leaders on stage to thank and remind them that the policemen were there to protect them and not to hurt them.

“The Sona will end with both of us at peace. Don’t mind the police, there’s no problem with that,” Dela Rosa said in Filipino.

Reyes said his group had reached an agreement with the police the night before, allowing its members to hold a rally as near as possible to the Batasang Pambansa complex.

“I think Mr. Duterte made the right move to tone down (the security). Commonwealth Avenue is no longer a war zone. It’s possible,” he said.

“Why hide behind container vans and blockades? He understands the right to our freedom of expression.”

The marchers stayed 300 meters away from the Sona venue and held a program that lasted for several hours, peppered with speeches and songs.

They brought along six murals depicting their concerns over urgent national issues, such as genuine land reform and the Enhanced Defense Cooperation Agreement between the Philippines and the United States.

Singer Aiza Seguerra, a known supporter of the President, even shared her music with the activists from atop a truck that served as mobile stage.

Strumming a guitar and sitting on a metal drum, she sang her original composition, “Pagbabago Kay Duterte,” and the sentimental “Sana.”

After inspecting the policemen lined along Batasan Road, Dela Rosa came up the stage and told the protesters: “I am here before you to let you know that we are happy with what you are doing. We thank you. We are here to protect you. We are not here to harm you.”

He drew cheers and applause from the crowd.

In past Sona rallies, the protesters were only allowed near Ever Gotesco Mall along Commonwealth Avenue.

Agitation to get past the blockades ended in skirmishes with policemen, resulting in injuries to both sides and arrests.

Early Monday, a farmer who was among those who came to join the march died after complaining of difficulty in breathing around 3 a.m.

Police identified him as Roberto Mapa, 35, of Uson, Masbate province, and a member of the Kilusang Mayo Uno chapter in his province.

Mapa’s colleague, Roilan Bravo, told investigators that they were sleeping at the Dagohoy covered court at the University of the Philippines in Diliman, where they are billeted, when the victim suddenly gasped for breath.

Mapa was declared dead on arrival at East Avenue Medical Center at 3:30 a.m.

The cause of death was still unknown as of press time last night. With reports from Julliane Love de Jesus, Inquirer.net; Maricar Brizuela and Jerome Aning/TVJ

Another first: Duterte powwows with militant leaders after Sona

‘We want peace of the living’