‘We want peace of the living’ | Inquirer News

‘We want peace of the living’ 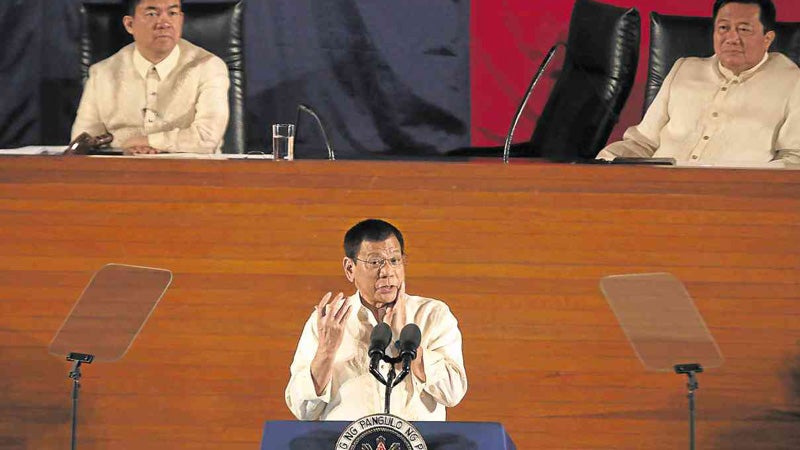 President Rodrigo Duterte announced on Monday a unilateral ceasefire in the government’s campaign against communist guerrillas in a bid to end a decades-long conflict that he said was “getting bloodier by the day.”

In a nearly two-hour State of the Nation Address (Sona), Mr. Duterte also called on Moro insurgents to set aside centuries of “mistrust and warfare.”

“All of them want peace, not the peace of the dead, but the peace of the living,” he said, reading from a 15-page text, spicing his first Sona with extemporaneous remarks in Filipino and Cebuano, but abstaining from his usual expletives, catching himself from uttering a cuss word at one point in the nationally televised, unusually no-frills event, a stark departure from its glitzy past.

The talks were scuttled in 2011 by then President Benigno Aquino III over a stalemate on the release of political prisoners.

“To immediately stop violence on the ground, restore peace in the communities and provide an enabling environment conducive to the resumption of the peace negotiations, I am now announcing a unilateral ceasefire with the CPP/NPA/NDFP effective immediately,” Mr. Duterte said.

He said he expected the NDFP and its forces to respond accordingly and end the conflict before his term ends in six years.

Jose Maria Sison, 77, in an internet message sent from his exile home in The Netherlands, welcomed Duterte’s announcement and said his organization would issue “a positive response” shortly.

“We share with President Duterte the determination to resume the formal talks and work for a just and lasting peace,” said the political science professor who founded the CPP in 1968, launching one of the world’s longest running communist insurgency.

From a peak strength of 25,000 during the martial law years under President Ferdinand Marcos, the NPA has dwindled to a force of 4,000, according to the military.

“The Armed Forces of the Philippines will abide by the Commander in Chief’s instruction but will remain alert, vigilant and ready to defend itself and pursue attackers if confronted by armed elements of the NPA,” said the AFP spokesperson, Brig. Gen. Restituto Padilla.

“The government has shown its sincerity and we expect no less from the other party. Our people long for and deserve peace and we shall work diligently as we have been doing all these years to deliver just that,” the AFP spokesperson said.

On Sunday, suspected communist guerrillas abducted four police officers in Malimono, Surigao del Norte. PNP Director General Ronald dela Rosa has vowed to do “whatever it takes” to secure the release of the officers.