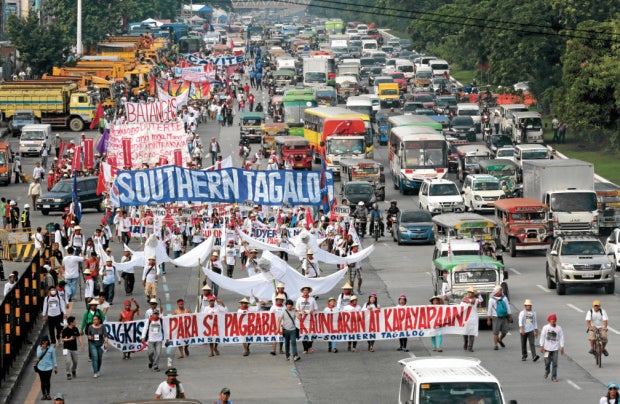 Protesters march towards the IBP road near the House of Representatives prior to the State of the Nation Address of President Rodrigo Roa Duterte on Monday, July 25, 2016. GRIG C. MONTEGRANDE

Militant groups on Monday applauded President Rodrigo Duterte’s announcement of the government’s temporary truce with the Communist Party of the Philippines (CPP).

During his first State of the Nation Address (Sona), Duterte said, “To immediately stop violence on the ground, restore peace in the communities and provide enabling environment conducive to the resumption of the peace talks, I am now announcing a unilateral ceasefire with the CPP/NPA/NDF effective immediately.  And call on our Filipinos in the National Democratic Front (NDF) and its forces to respond accordingly.

The CPP’s armed wing, the New People’s Army (NPA), has been waging the longest-running communist insurgency in Asia.

Bagong Alyansang Makabayan (Bayan) Secretary General Renato Reyes Jr., one of those who led the Sona rally, said they are looking forward to the continuation of the peace process.

He said they are hopeful with Duterte’s “clear pronouncement” ordering a unilateral ceasefire.

He pointed out that a ceasefire should involve the pull-out of troops in heavily militarized communities.

(The AFP should demilitarize the lumad communities, let the lumad here go back to their homes.)

Reyes also said the government should stop arresting its critics, especially those in rural areas.

(If that is achieved, the ceasefire announced by the government will have meaning, providing better climate for formal talks for both sides.)

He said they hoped that some political prisoners would be released by August 20, during the formal talks of the government and the NDF. TVJ