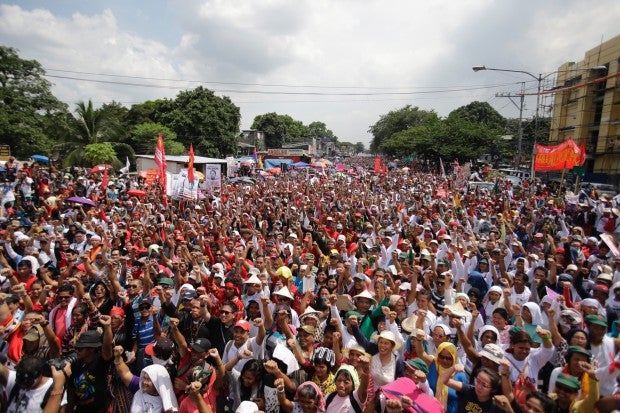 Filipino activists and supporters for Philippine President Rodrigo Duterte raise their clenched fists as they arrive near the gates of the House of Representative where President Duterte is set to deliver his first state of the nation address in suburban Quezon city, north of Manila, Philippines on Monday July 25, 2016. Thousands of activists were allowed near the gates to listen to President Duterte’s speech. AP Photo

President Rodrigo Duterte’s first State of the Nation Address (Sona) on Monday was “generally peaceful” and the “supportive” rallyists played a huge part, the military said.

“There was not serious threat monitored and the cooperation of ‘supportive’ rallyists was a big factor in the successful outcome of the Sona security coverage,” Armed Forces spokesperson Brig. Gen. Restituto Padilla said.

This year’s Sona was different from previous years as this was the first time that militants were allowed to get closer to Batasang Pambansa.

“If every occasion for SONA can be done this way where cooperation and dialogue becomes the norm, then violent confrontations and dispersals will become a thing of the past,” Padilla said. RAM