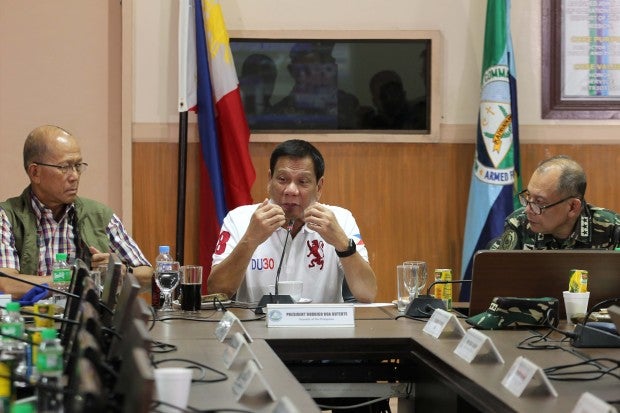 BULUAN, Maguindanao—President Duterte on Friday defended his government’s sustained war on illegal drugs amid criticism it appears to be targeting the poor.

Mr. Duterte also got back at his detractor who moan the lack of any “big fish” among the hundreds of drug dealers and addicts so far arrested or killed since the campaign began this month.

“Hey, I have to invade a country to arrest the drug lords,” he said. “I will not name the country, but obviously, it is known to you.”

He dared those who keep asking “where’s the big fish?” to come with him and, “I will let you inside the intelligence room and see for yourself.”

“That’s the problem with Filipinos, many pretend to be bright when they are not,” he said.

Mr. Duterte said the Philippine Drug Enforcement Agency had placed at 2 million the number of drug users and pushers in the country two years ago. He said the present estimate was 3.7 million.

“You see the number of those who surrendered. You see it every day on TV. And they say that crime has gone down, that’s natural. Why wouldn’t it go down when everything has been contaminated [by drugs],” he said.

He described as “Chinese style” the way drugs are sold here in retail, making it more affordable.

Mr. Duterte also said drug syndicates operating outside the country used technology, with a “big map of the Philippines to locate where to drop the drugs.”

But he admitted that those arrested in the country were just the “lieutenants.”

“When we say about big boss, general, they are not here,” Mr. Duterte said.

The President was here to inspect the 4.5-megawatt biomass power plant that was scheduled to commercially operate by the end of the year, in what is considered the first in the country.

Friday’s visit here was the second made by the President to a province in the Autonomous Region in Muslim Mindanao since winning the May 9 election. On Thursday, Mr. Duterte was in Basilan, where he held a command conference with military officials. TVJ