Trump: USA will be great again

CLEVELAND—Donald John Trump accepted the Republican presidential nomination on Thursday night (Friday in Manila) with an unusually vehement appeal to Americans who feel their country spiraling out of control, and yearn for a leader they feel will take aggressive, even extreme, actions to protect them.

Trump, 70, a New York real-estate developer and reality television star who leveraged his fame and forceful persona to become the rare political outsider to lead the ticket of a major party, drew exuberant cheers from convention delegates at Quicken Loans Arena where he delivered a speech as fiery as his candidacy.

With dark imagery and an almost angry tone, Trump portrayed the United States as a diminished and even humiliated nation, and offered himself as an all-powerful savior who could resurrect the country’s standing in the eyes of both enemies and law-abiding Americans.

“Our convention occurs at a moment of crisis for our nation,” an ominous-sounding Trump said, standing against a backdrop of American flags. “The attacks on our police and the terrorism in our cities, threaten our very way of life. Any politician who does not grasp this danger is not fit to lead our country.”

Trump nearly shouted the names of states where police officers had been killed recently, as the crowd erupted in applause and returned repeatedly to the major theme of the speech: “Law and order,” he said four times, each time drawing out the syllables.

But his speech—the longest, at an hour and 15 minutes, since at least 1972—had relatively little new to offer women, Hispanics, blacks and others who have been turned off by Trump’s incendiary brand of politics. He did sound like a different sort of Republican at times, though, making no mention of abortion—a core issue for many Republicans.

“These are the forgotten men and women of our country,” said Trump, a billionaire with a mixed record of job creation and layoffs. “People who work hard but no longer have a voice—I am your voice.”

He even vowed “to do everything in my power to protect our LGBTQ citizens from the violence and oppression of a hateful foreign ideology.”

Facing a restive party on the final night of a convention that has been unusually turbulent and divided, Trump seemed to make headway in galvanizing and unifying at least those Republicans gathered in the hall. The nearly full arena was rapt as he spoke, and when he began discussing illegal immigration, a familiar chant quickly broke out in the arena: “Build the wall, build the wall!”

Trump dwelled at length on illegal immigrants and lawless Americans, saying they are as dangerous for the nation’s security as the Islamic State (IS) and Syrian refugees. In doing so, Trump advisers said, he sought to win over undecided voters sickened by recent violence against police officers and worried about safety, yet are unsure if Mr. Trump has the temperament and abilities to be commander in chief.

“I have a message to every last person threatening the peace on our streets and the safety of our police: When I take the oath of office next year, I will restore law and order to our country.”

While nomination speeches are traditionally optimistic and personal, full of hope and revelations that cast candidates in the best possible light for voters, Trump sounded like a wartime president, using the word “threat” seven times and promising to “defeat the barbarians of IS.” He also recited homicide rates in American cities and the thousands of illegal immigrants with criminal records, promising to control violence at home and abroad.

“It is time to show the whole world that America is back—bigger, and better and stronger than ever before,” Trump said.

He was blistering about Hillary Clinton, his Democratic opponent, and her tenure as secretary of state, arguing that her diplomatic strategy in Syria, Iraq, Egypt, Libya and other countries had led to civil unrest and political chaos, and rendered her unfit to be president. 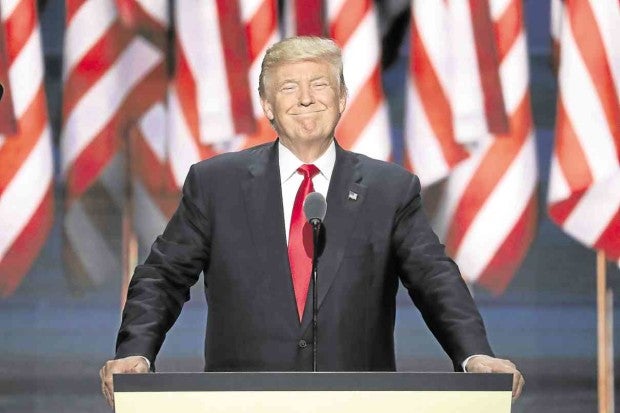 NO STOPPING HIM NOW Republican presidential candidate Donald Trump grins smugly on the final day of his party’s national convention in Cleveland on Thursday (Friday in Manila). At right, daughter Ivanka, who almost stole the show from her dad, appears to be his trump card. AP/AFP

Trump’s elder daughter, Ivanka, also sought to reach out to Democrats and moderates, extolling him as a champion of women in the workplace, and a leader who would “take on the bold and worthy fights, who will be unafraid to set lofty goals and relentless in his determination to achieve them.”

The operatic quality of the first three days of the convention worried some Republicans. Presidential candidates have two major issues to deal with over the summer, their vice presidential selection and their convention, and they felt he had bungled both.

Trump chose his running mate, Gov. Mike Pence of Indiana, haphazardly, and then gave statements that collided with Pence’s beliefs.   For example, just hours before Pence, a committed internationalist, assured delegates and millions of voters that America would defend its allies, Trump gave an interview in which he balked at defending Nato countries, a policy that has been the cornerstone of the alliance for 70 years.

In many ways, the convention’s formality was an awkward fit for Trump, who soared in the primaries by energizing voters at freewheeling rallies with his off-the-cuff and frequently entertaining remarks. Instead, for Thursday night, he relied on a teleprompter and a speech heavy with familiar Republican themes like cutting taxes, creating jobs and pushing for education reforms to give parents more choice in schools for their children.

Yet he also made more personal promises, like being the ultimate safeguard for the younger generations of Americans. TVJ

Donald Trump: ‘We are going to win the presidency’