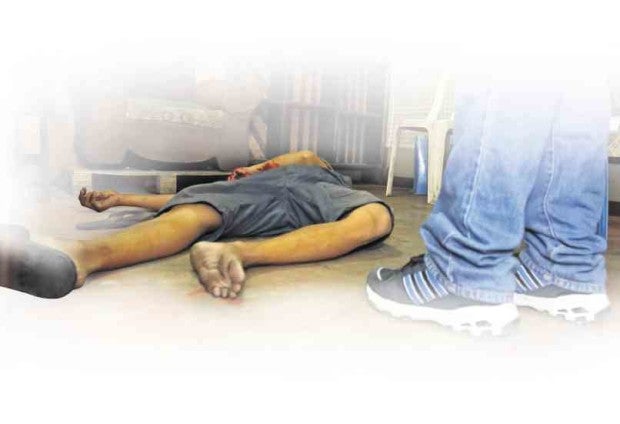 THE BODY of a suspected drug user lies in his living room in a Cebu City village after a gunman, still unidentified, shot him. LITO TECSON/CEBU DAILY NEWS

The full size of the drug monster that President Duterte vowed to reduce to a bloody pulp is starting to show as thousands of drug users surrender en masse in Pampanga province and new jail data show that up to 60 percent of inmates in Mindanao are facing drug-related cases.

In Pampanga, police gathered 10,234 drug users and pushers from 19 towns and two cities in a surrender ceremony on Thursday.

It was the single biggest batch of users to surrender so far in the light of Mr. Duterte’s war on drugs.

As early as 5 a.m., village leaders brought to the Bren Z. Guiao grandstand here 9,689 users and 545 pushers. They said these people surrendered because they were “afraid of President Duterte.”

Some said they surfaced hoping to clear their names that were on drug watch lists kept by the Barangay Anti-Drug Abuse Councils (Badac). Others said they needed help to kick their addiction.

Vice Gov. Dennis Pineda used the occasion to unveil the Dalan ning Pamagbayu (Road to Change), a rehabilitation and reintegration program approved on Tuesday by the provincial peace and order council. It was given a P10-million budget.

“We are not ashamed of you,” said Pineda, addressing the users.

“Let’s help one another. We have your photographs. We know where your houses are. We know your true names. You are now in our database,” Pineda said.

Citing the support of the Armed Forces of the Philippines, Aquino warned: “We are not only using 9 mm [pistols]. We are going to use M-14 [rifles] on you if [needed].”

Gov. Lilia Pineda said: “I can’t believe you are so many. Where have I gone wrong as a leader?”

Throughout Central Luzon, more than 30,000 users and pushers surrendered while 1,000 peddlers were arrested.

In Pangasinan province, Gov. Amado Espino III asked the police to investigate the killings of suspected drug dealers in the province since July 1.

Espino also directed police to look into reports that vigilante groups in the province were responsible for some of the killings.

Espino described the killings as “unusual.”

In Camarines Sur province, police credited community support for the success of the government’s antidrug campaign, following the surrender of almost 10,000 confessed drug users and pushers in July alone.

Senior Supt. Walfredo Pornillos, provincial police director, said the high number of drug dependents who presented themselves to the police showed the extent of the problem of illegal drugs in the province.

He said those who turned themselves in could help the government collect information on the illegal drug problem in the province.

Bongat said almost 2,000 drug suspects surrendered and promised to reform since the government intensified its crackdown on illegal drugs.

He said the city council had allotted P2 million to fund programs to help suspects reform.

In Southern Mindanao, data from the Bureau of Jail Management and Penology (BJMP) showed that six out of 10 inmates in prisons across the region are facing drug-related problems, which officials said was a sign that the drug problem was far bigger than initially thought.

Senior Supt. Lyndon Torres, BJMP Southern Mindanao head, said in a statement that the high number of drug offenders had “largely contributed to severe congestion of jails in the region.”

Torres said 3,615 detainees, which represent about 66 percent of the total jail population of 5,507, had been charged with drug crimes.

Most detainees are also young, between 19-21 years old, said Torres.

The female dormitory at the Davao City jail has the most inmates facing drug charges.

Torres said the trend appeared to be the same nationwide.