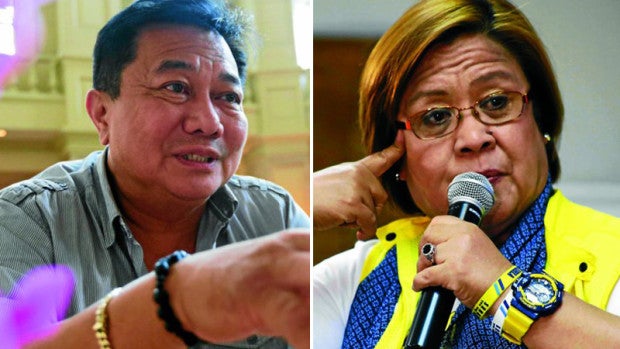 Presumptive Speaker Davao Del Norte Rep. Pantaleon “Bebot” Alvarez on Friday said he would file a resolution to investigate Senator Leila de Lima over the proliferation of drugs at the National Bilibid Prison (NBP) during her stint as justice secretary.

In an interview during a luncheon meeting of the Partido Demokratikong Pilipino-Lakas ng Bayan (PDP-Laban) in Makati, Alvarez said there is a need to investigate De Lima in connection with the continuing operation of drugs by convicted drug lords even within the walls of the national penitentiary.

“I will file a resolution para imbestigahan yan (to investigate it),” he added.

He made the statement as he reiterated his rejection of a congressional probe on the spate of extrajudicial killings amid the war on drugs of President Rodrigo Duterte.

He said it would be a “waste of time” to investigate summary killings because there is no new legislation that would come out of such inquiry in aid of legislation.

He said extrajudicial killings and torture are already outlawed by existing pieces of legislation.

“Dapat in aid of legislation yan. So anong legislation ang tinitignan natin dito? What? Pag napatunayan mo na may extrajudicial killings, what will be the amendment? To make it illegal? Illegal na yan. Nasa batas talaga, hindi pupwede yan, it is a crime,” Alvarez said.

(It should be in aid of legislation. So what legislation are we looking at? If you have proven that there are extrajudicial killings, what will be the amendment? To make it illegal? That’s illegal. According to the law, it’s a crime.)

He said Congress also is limited to recommending charges and not prosecuting people investigated for criminal offenses.

“Let us remember that Congress has no prosecutorial power,” Alvarez said.

He said the Department of Justice should be left to investigate the increase in extrajudicial killings of suspected criminals and drug pushers, whose bodies emerged hogtied, shot and left to rot on the streets of Manila almost on a daily basis.

(It’s a waste of time…Why should the lawmakers probe it when we have many priority bills we need to focus on? So let us not interfere with it.)

He said Congress should instead focus on passing pertinent pieces of legislation, like the national budget bill or the General Appropriations Act.

Alvarez made the call to investigate De Lima amid smear propaganda linking the former justice secretary to convicted bank robber Herbert Colangco, who was identified by Duterte as a top drug lord in the country.

It was also during De Lima’s stint as justice secretary when she busted drug lords living in luxurious quarters inside the Bilibid and continuing their drug trade within the penitentiary.

For Alvarez, the raids of prisons led by De Lima to capture contraband items were just a show.

He denied that he wanted De Lima investigated as payback for the senator who probed Duterte as then Davao City mayor over the latter’s links to the Davao Death Squad, a vigilante group responsible for over 1,000 deaths of suspected criminals and drug pushers in Davao City.

The presumptive speaker also raised the possibility of leading a congressional investigation into the alleged anomalies of the Department of Transportation and Communication under former Transportation Secretary Joseph Emilio “Jun” Abaya, particularly on the issuances of license plates and the delay in procurement of new trains for the Metro Rail Transit (MRT) system. RAM/rga