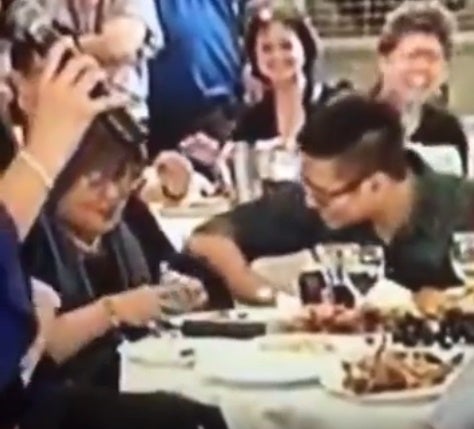 The Office of Senator Leila de Lima on Sunday denied that she sat and supposedly rubbed elbows in an event last year with Herbert Colangco, whom President Rodrigo Duterte had tagged as belonging to a triad running an illegal drugs trade.

In a video posted by “Batang Maharlika” on YouTube, De Lima can be seen singing a few lines from Imelda Papin’s “Bakit.”

Upon returning to her seat, a man wearing sunglasses can be seen seated seemingly close to her.

A statement issued by De Lima’s office said that the video was taken during the senator’s birthday party held at the Department of Justice (DOJ) quadrangle in August 2015.

“The viral video showing Sen de Lima singing was actually taken during her own bday party at the DOJ quadrangle last Aug 2015. The person who was claimed to be drug lord Colangco is really Cong. Alfred Vargas, who was one of the guests. Others who attended were emcee Imelda Papin, Usec Jovy Salazar (shown at the foreground of the video), and DOJ employees,” the statement from De Lima’s office read.

The senator’s staff also discredited another photo of the senator supposedly singing in a birthday party of a drugs lord. De Lima’s office said that the photo was taken during the concert party of Zaldy Aquino at Zirkoh last December 28.

Aside from Colangco, Duterte has also named Peter Lim and Peter Co as top drug lords in the country.

Colangco has been linked to several bank robberies in Metro Manila and is serving time since 2009 at the maximum security compound of the New Bilibid Prisons.

De Lima  earlier said that she would file a resolution that would launch a congressional inquiry and investigate the spate of killings of suspected drug users. JE/rga