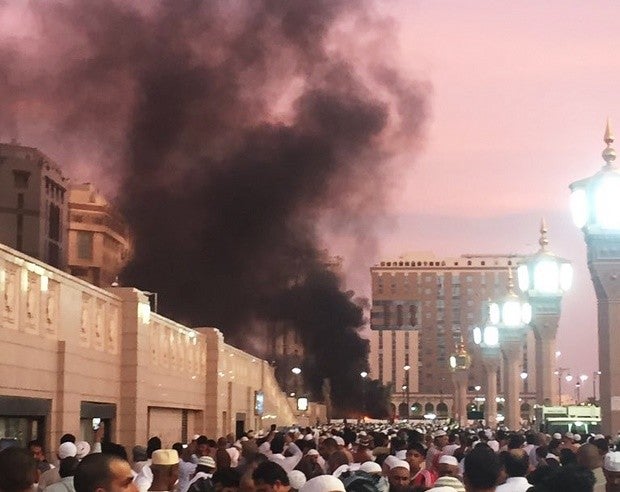 In this photo provided by Noor Punasiya, people stand by an explosion site in Medina, Saudi Arabia, Monday, July 4, 2016. State-linked Saudi news websites reported an explosion Monday near one of Islam’s holiest sites in the city of Medina, as two suicide bombers struck in different cities. AP

RIYADH, Saudi Arabia — Saudi Arabia says a Pakistani man who came to the kingdom 12 years ago to work as a driver carried out the suicide bombing outside of one of Islam’s holiest sites.

An Interior Ministry statement issued on Tuesday identifies the man as 34-year-old Abdullah Qalzar Khan. It says he lived in the Red Sea port city of Jiddah with “his wife and her parents.” The statement didn’t elaborate.

Monday’s suicide bombing killed four Saudi security troops and wounded five others in a parking lot outside the sprawling mosque grounds where the Prophet Muhammad is buried in Medina.

No group has yet claimed responsibility for the attack there, as well as others near the US Consulate in Jiddah and a suicide car bombing near a Shiite mosque in eastern Saudi Arabia.