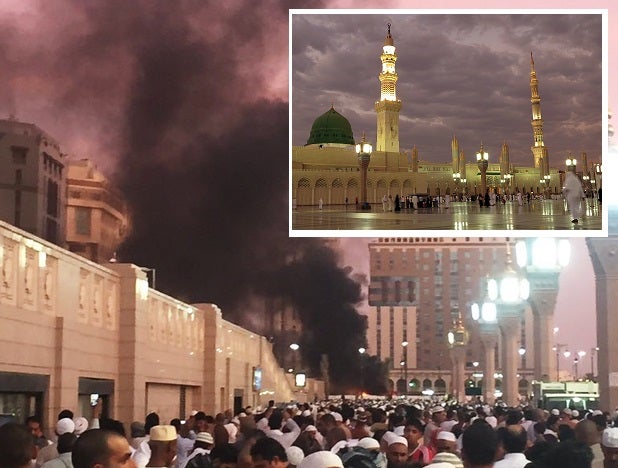 In this photo provided by Noor Punasiya, people stand by an explosion site in Medina, Saudi Arabia, Monday, July 4, 2016. State-linked Saudi news websites reported an explosion Monday near the Prophet’s Mosque (inset), one of Islam’s holiest sites in the city of Medina, as two suicide bombers struck in different cities.  AP

RIYADH, Saudi Arabia — At least four people died in suicide bombings in Saudi Arabia on Monday following attacks elsewhere in the region before the end of Ramadan, the Muslim holy month.

There were no immediate claims of responsibility for the three attacks one of which, at the Prophet’s Mosque in Medina, left four members of the security forces dead and others wounded.

READ: Explosion near one of Islam’s holiest sites in Saudi Arabia

Since late 2014 Saudi Arabia has been hit by bombings and shootings claimed by the Islamic State of Iraq and Syria (ISIS) group but multiple attacks on the same day are unusual.

The Prophet’s Mosque, in the west of the kingdom, is one of Islam’s holiest sites — where Mohammed is buried and which attracts millions of visitors each year.

“Security forces suspected a man who was heading towards Al-Masjid al-Nabawi (the Prophet’s Mosque) as he passed through a visitors parking lot,” the interior ministry said in a statement.

“As they tried to stop him, he blew himself up with an explosive belt causing his death, and the death of four security personnel,” said the statement, adding that five others were injured.

The two other blasts occurred in the Red Sea city of Jeddah near the US consulate and in Shiite-populated Qatif on the Gulf coast of the country.

The Al-Arabiya news channel showed images of fire raging in the parking lot with at least one body nearby.

Two security officers were wounded in the Jeddah bombing, the interior ministry said.

Residents of Qatif said body parts were found near a Shiite mosque and the interior ministry confirmed the suicide bombing clarifying that “the body parts of three people were found” at that site but have not yet been identified.

The ministry said the deadly Medina attack occurred during sunset prayers after which Muslims break their Ramadan fast.

‘Suicide bomber for sure’

The Prophet’s Mosque is particularly crowded during the Muslim holy month of Ramadan, which is supposed to be a time of charity but has seen spectacular attacks around the region.

Sunni extremists from ISIS claimed, or were blamed for, a suicide bombing in the Iraqi capital Baghdad on Sunday that killed more than 200 people as well as attacks in Bangladesh Friday night and at Istanbul’s Ataturk airport last week.

“Suicide bomber for sure. I can see the body” torn apart, said one witness to the attack in Qatif, on the Gulf coast.

Another witness, who gave his name only as Ayman, told AFP there were two explosions near the Shiite mosque.

Pictures said to be from the scene and circulated by residents showed a small fire burning in the street, severed limbs and what appeared to be a severed head.

Attack on US Independence Day

Monday’s first bombing, near the US consulate in Jeddah, was carried out not by a Saudi but by a “resident foreigner,” General Mansour al-Turki, the interior ministry spokesman, told Al-Arabiya.

Turki told state Al-Ekhbaria news channel that the suspect, in his 30s, was closer to a mosque in the area than to the American consulate.

He also said, on the news channel’s Twitter account, that “devices that failed to explode (were) found in the vicinity of the site”.

The American embassy in Riyadh reported no injuries among US consulate staff.

A picture carried by the Sabq online newspaper, which is close to authorities, showed a large body part lying on the ground between a taxi and the open door of another car that was peppered with holes.

The attack coincided with the US July 4 Independence Day holiday.

Since late 2014 a series of bombings and shootings claimed by ISIS in Saudi Arabia has targeted minority Shiites as well as members of the security forces, killing dozens of people.

Most of the attacks have been staged in Eastern Province, home to a majority Shiites in the Sunni-dominated Gulf state.

Millions of expatriates, many from Muslim-majority nations in the Middle East and Asia, work in the kingdom.

ISIS leader Abu Bakr al-Baghdadi has called for attacks on Saudi Arabia, which is taking part in the US-led coalition bombing the jihadists in Syria and Iraq.

The group also considers Shiites to be heretics.