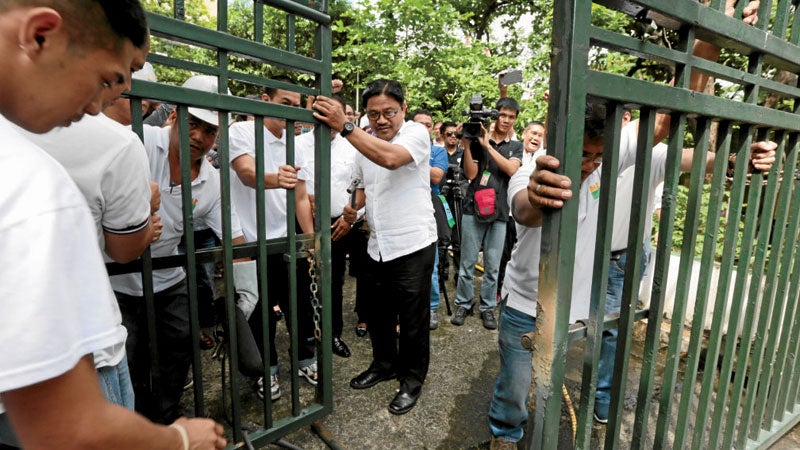 OPEN DOOR POLICY Agrarian Reform Secretary Rafael Mariano leads the opening of the main gate of the Department of Agrarian Reform on the Elliptical Road in Quezon City on Monday. Mariano announced his open door policy for farmers in the once heavily guarded government agency. GRIG C. MONTEGRANDE

CHANGE has come to the Department of Agrarian Reform (DAR) and it is more than symbolic.

In his first week on the job, Agrarian Reform Secretary Rafael Mariano, who comes from the peasantry, literally broke open the gates of his office.

For 18 years, the driveway gates of the DAR on Elliptical Road in Quezon City had been chained, locked and even welded and rusted shut to keep protesters at bay.

One of those known to stage rallies frequently outside the gates was the peasant group, Kilusang Magbubukid ng Pilipinas (KMP), of which Mariano is a founding member and former chair.

Mariano was also a president and member of the Anakpawis party-list and chair of Bagong Alyansang Makabayan, groups known to be at the forefront of rallies critical of the government.

But now, Mariano seeks to break down any wall between the government and the citizens.

“This symbolizes that DAR, on all levels, will maintain open. We will follow a policy of continuing open and productive dialogues between the officials and employees of DAR and other stakeholders of agrarian reform, especially our farmers and agricultural workers, and advocates,” Mariano said on Monday afternoon, after torching and hammering the gate locks open.

“This serves to remove all fences, walls between the officials and employees of DAR, and our stakeholders,” Mariano said.

Long been unused, the DAR driveway had grown slippery with moss.

It had to be cleaned on Monday before the gates were opened.

Employees recalled that public utility jeepneys used the driveway as part of their routes when the gates were still open in the early 1990s.

Asked about his experience outside the DAR gates as a protester, Mariano said, “Farmers led by the KMP stayed here for more than a week before the Jan. 22, 1987, Mendiola Massacre.”

Mariano actually saw this background as his primary credential as President Duterte’s appointee.

“What I have to hold onto, as the new secretary of DAR, is that I am truly from a family of farmers. I have been with KMP for more than 30 years and I have almost nine years’ experience as representative of Anakpawis in Congress,’’ he said.

“I have experience knowing the pulse, the gripes, the dream of our farmers to own the lands they till.”

Mariano said he would welcome to the DAR all farmers with complaints—even protesters.

“If anyone comes to the agency, if there are any rallies, pickets or demonstrations in front of the office, let us not worry. Our farmers come here to the DAR for a reason. Let us welcome them,” Mariano said as a message to the DAR employees.

The DAR Employees Association secretary, Gloria Almazan, who has been with the department since 1992, said the closure of the gates started during the Estrada administration.

But the office became akin to a “garrison” starting 2010, with consecutive rallies hounding the then Aquino administration.

“The management said it was for our safety, for the safety of the building and property … so it would be better if they controlled the entry of people,” Almazan said.

It was under the second Aquino administration when grills were added to the glass doors and even windows of the DAR.

This explains why Almazan’s coworkers were chanting: “We are free!” when Mariano broke open the gates.

Almazan said she did not fear for her safety with the gates opened. “It’s better for the farmers to come in. I understand the farmers are facing a lot of problems so you really have to attend to them.”

Read Next
Death toll in Baghdad bombing rises to 213
EDITORS' PICK
PH logs 7,302 new COVID-19 cases — DOH
Taguig exceeds daily COVID-19 vaccination target of 6,800 individuals for 3 days
Robredo urges supporters: Don’t think we’re the only ones who are good
Alex Eala wins Grand Slam on Independence Day: ‘I hope I made my contribution to the country’
Ahead of ONE: Full Blast II, Mongkolpetch warns Elias Mahmoudi: ‘Watch out for my fists’
Kai Sotto continues to inspire Filipinos by sharing his passions and stories with Smart Prepaid
MOST READ
China cautions G7: ‘small’ groups don’t rule the world
Leni vs. Sara
PH to have cloudy, rainy Monday — Pagasa
1Sambayan to nominees: Stick to word of honor
Don't miss out on the latest news and information.