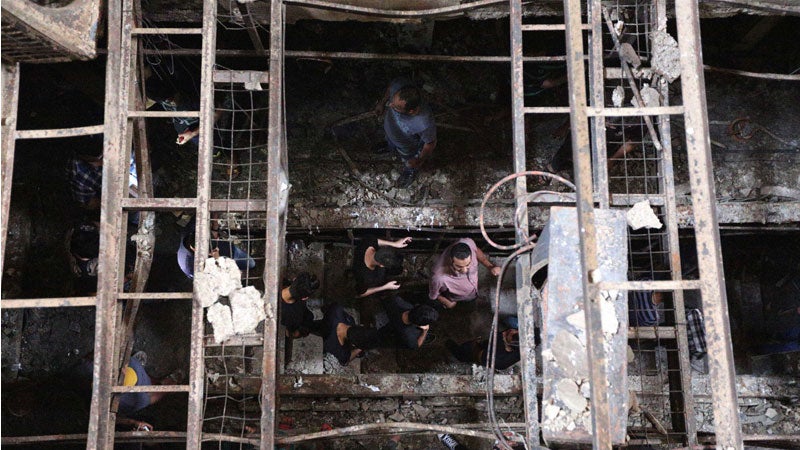 Iraqi men looks for victims who went missing after a truck bomb hit Karada, a busy shopping district in the center of Baghdad, Iraq, Monday, July 4, 2016. More than 100 people died Sunday in a car bombing that Islamic State said it carried out, an official of the Iraqi Interior Ministry said. (AP Photo/Hadi Mizban)

BAGHDAD—Iraqis on Monday mourned the more than 200 people who were killed by a jihadist-claimed suicide car bombing that was among the deadliest ever attacks in the country.

The blast, which the Islamic State (IS) group said it carried out, hit the Karada district early Sunday as the area was packed with shoppers ahead of this week’s holiday marking the end of the Muslim fasting month of Ramadan.

The attack sparked anger among Iraqis at the government’s inability to keep them safe and prompted Prime Minister Haider al-Abadi to announce efforts to address longstanding flaws in Baghdad security measures.

Abadi’s office announced three days of national mourning for the victims of the attack and he vowed to “punish” the perpetrators of the blast.

The attack, which security and medical officials told Agence France-Presse (AFP) killed at least 213 people and wounded more than 200, came a week after the country’s forces recaptured Fallujah from IS, leaving Mosul as the only Iraqi city under the jihadist group’s control.

The blast sparked infernos in nearby buildings, and emergency personnel and family and friends of the victims were still searching on Monday for those missing following the explosion.

A member of the civil defense force said it would take days to recover the bodies of the victims.

Hussein Ali, a 24-year-old former soldier, said six workers at his family’s shop were killed, their bodies so badly burned they could not be identified.

“I will return to the battlefront. At least there, I know the enemy so I can fight him. But here, I don’t know who I’m fighting,” Ali told AFP.

IS issued a statement claiming responsibility for the suicide bombing, saying it was carried out by an Iraqi as part of “ongoing security operations.”

The UN envoy to Iraq, Jan Kubis, condemned the “cowardly and heinous act of unparalleled proportions,” calling on authorities to bring those responsible to justice.

Officials said another explosion in the Shaab area of northern Baghdad killed at least one person and wounded four on Sunday, but the cause of the blast was disputed.

Bombings in the capital have decreased since IS overran large areas north and west of Baghdad in June 2014, with the jihadists apparently more concerned with operations elsewhere.

But the IS group has struck back against Iraqi civilians after suffering military setbacks. In May, Baghdad was rocked by a series of blasts that killed more than 150 people in seven days.

One video from the scene showed men—apparently angry at the government’s failure to prevent the carnage in Karada—throwing rocks at what was said to be Abadi’s convoy, while a man could be heard cursing at him in another clip.

But the premier struck a conciliatory tone.

“I understand the emotional feelings and actions that occurred in a moment of sadness and anger,” Abadi said in a statement.

With thousands of vehicles moving in and out of the city each day, such bombings are difficult to prevent.

But there are also flaws in security measures in the city, especially the use of fake bomb detectors at checkpoints years after the man who sold them to Iraq was jailed for fraud in Britain.

Abadi announced a series of changes to security measures following the Sunday bombing, including scrapping the fake detectors.

He also ordered the deployment of scanning devices at entrances to Baghdad to be sped up, directed that security personnel be banned from using mobile phones at checkpoints, and called for increased aerial reconnaissance and coordination among security forces.

Iraqi forces recaptured Fallujah, a city 50 kilometers (30 miles) west of Baghdad, from the jihadists a week ago.

Antigovernment fighters seized Fallujah in early 2014 and it later became one of IS strongholds in the country.

The defeat of IS in Fallujah was compounded by a devastating series of air strikes targeting jihadist forces as they sought to flee the city.

Iraqi and US-led coalition aircraft destroyed hundreds of IS vehicles and killed dozens of fighters in two days of strikes against jihadist convoys after the end of the Fallujah battle, officials said.

With Fallujah retaken, Iraqi forces are now setting their sights on  Mosul, the last major population center held by IS in Iraq. AFP