Australians head to the polls in tight election contest 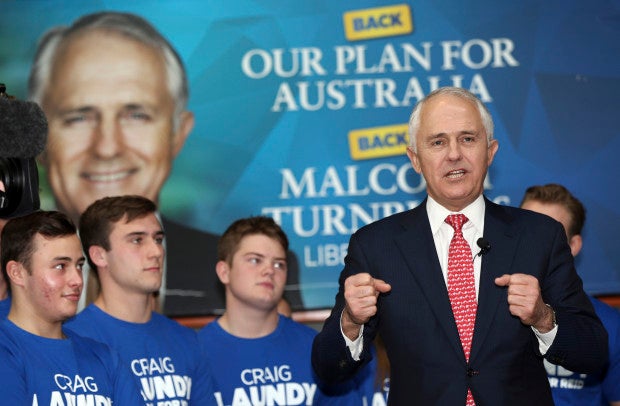 Australian Prime Minister Malcolm Turnbull speaks to the media during his visit to a small business factory in the western suburbs of Sydney Friday, July 1, 2016. Australians go to the polls Saturday with the opposition leader vying to become the country’s fifth prime minister in three years. Global market turmoil since the Brexit vote, Australia’s success in turning back asylum seeker boats, gay marriage, housing prices, corporate tax rates and union corruption have been major issues in the eight-week campaign. AP

CANBERRA, Australia — After years of political turmoil, Australians headed to the polls on Saturday with leaders of the nation’s major parties each promising to bring stability to a government that has long been mired in chaos.

The election, which pits the conservative coalition government against the center-left Labor Party, caps off an extraordinarily volatile period in the nation’s politics. Australian political parties can change their leaders under certain conditions and have done so in recent years with unprecedented frequency. Should Labor win, its leader, Bill Shorten, will become Australia’s fifth prime minister in three years.

The so-called revolving-door prime ministership, coupled with current global instability wrought by Britain’s vote to leave the European Union, prompted promises by Prime Minister Malcolm Turnbull that sticking with the status quo was the safer choice.

“In an uncertain world, Labor offers only greater uncertainty,” Turnbull warned in one of his final pitches to voters this week. “They have nothing to say about jobs, growth or our economic future.”

Labor, meanwhile, has sought throughout the eight-week campaign to cast the government as deeply divided, with Shorten saying: “You cannot have stability without unity.”

Selling stability is a tough job for either party, both of which have been marred by infighting in recent years. Shorten played a key role in ousting two of the Labor Party’s own prime ministers in the space of three years, and Turnbull himself ousted Tony Abbott as prime minister in an internal party showdown less than a year ago.

Though the race is tight, polls suggest that Labor won’t be able to gain the 21 seats it needs to form a majority government in the 150-seat House of Representatives. Labor currently holds 55 seats, the conservative coalition has 90, and minor parties and independents have five.

Results of Sydney-based market researcher’s Newspoll that were published in The Australian newspaper on Saturday showed the coalition leading by 50.5 percent to Labor’s 49.5 percent. The Newspoll was based on interviews with 4,135 people conducted between Tuesday and Friday, and has a 3 percentage point margin of error.

The government has focused much of its campaign on a promise to generate jobs and economic growth through tax cuts to big businesses. Economic growth is a key issue for many Australians, who have seen thousands of jobs vanish from the country’s once-booming resources sector amid China’s industrial slowdown.

Labor has said it will keep the higher tax rates and use the revenue to better fund schools and hospitals.

Same-sex marriage has also emerged as a campaign issue. Turnbull, who personally supports gay marriage despite his party’s opposition to it, has promised to hold a national poll known as a plebiscite this year that would ask voters whether the nation should allow same-sex marriage. But governments are not bound by the results of plebiscites, and some conservative lawmakers have said they would vote down a gay marriage bill even if most Australians supported marriage equality.

Labor, which dubbed the plebiscite a waste of taxpayers’ money, promises that the first legislation the party will introduce to parliament will be a bill legalizing same-sex marriage.