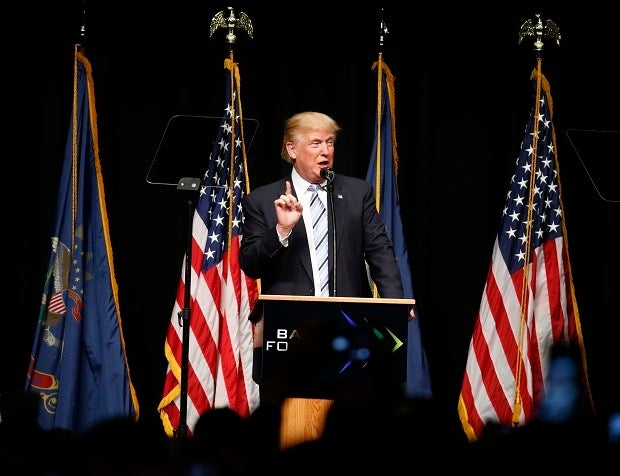 Australia is in the early weeks of campaigning before the July 2 election and how its leader would deal with a possible President Trump has emerged as an issue.

The United States is Australia’s most important strategic ally and successive Australian governments undertake to work with whatever administration Americans choose.

Shorten, who leads the center-left labor Party, told a Darwin radio station that a Trump administration was among “the sort of scenarios you hope don’t emerge.”

“America’s a great friend of Australia; whoever they dish up we’ll work with, but: wow, Trump’s sort of — It’s sort of the ultimate victory of celebrity politics,” he added.

Shorten described Trump’s popularity as the “ultimate protest vote,” and a warning that Australia should pursue policies of fairness and equality.

Shorten later defended his strident attack on Trump at a news conference, but declined to repeat his “barking mad” comment in front of television cameras.

“I think he’s got very erratic views. I think that the views he has are not views that sit comfortably with the mainstream of Australian opinion,” Shorten said.

Turnbull, who leads a conservative coalition, later declined to give his own views on Trump.

“You can imagine how Australians would feel if an American president were to describe one of our prime ministerial aspirants as ‘barking mad.’ You can imagine the resentment and ill will that would create in Australia,” Turnbull told reporters.

“It is absolutely critical that our … prime minister, whether it is me or Mr. Shorten, is able to deal with the new American president … without the relationship being clouded or affected by comments of the kind Mr. Shorten has made,” he added.

Turnbull in January made his only trip to the United States as prime minister and spoke to a single Republican seeking the presidential nomination, taking a phone call from Marco Rubio. Turnbull also took a call from Democratic contender Hillary Clinton, whom the former merchant banker has known since 1992.

Leaders of major Australian parties rarely weigh into American domestic politics. But in 2007, then conservative Prime Minister John Howard created a furor by saying al-Qaida would be praying for a victory by then Democrats presidential hopeful Barack Obama because the Illinois senator promised to withdraw troops from Iraq.