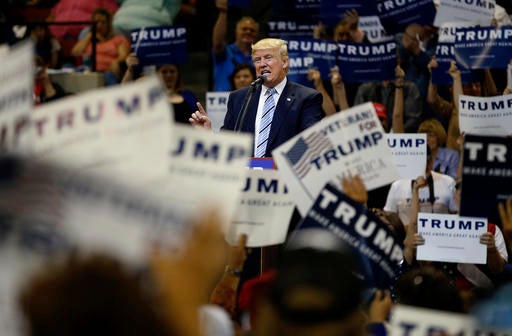 Trump vaulted past the threshold of 1,237 needed to win the party’s primary race when a group of unbound delegates from North Dakota said they would back him.

The accomplishment caps an extraordinary rise by a political neophyte whose campaign was widely derided as a distraction and a publicity stunt last June, when Trump announced his candidacy.

Trump eventually swept 16 Republican rivals aside, and was the last man standing when his remaining two challengers quit the race early this month.

“The folks behind me got us right over the top from North Dakota,” Trump told reporters in Bismarck, standing with some 15 unbound delegates from the Midwestern state who committed their support to the real estate tycoon.

Several US media outlets, citing their own analysis of pledged delegates and unbound delegates who announced their commitment to Trump, said earlier Thursday that Trump reached or surpassed the 1,237 mark.

The Republican Party will not make the delegate results official until its national convention in July, when delegates vote for their nominee.

Trump was already the Republican presumptive nominee, following a spectacular and unlikely run for the White House that thoroughly upended American politics.

On Thursday, he took a victory lap of sorts, addressing a crowd in Billings, Montana where he mapped out a bit of his future campaign strategy to focus on swing states like Florida, Ohio and Michigan, as well as California.

“I want to focus on 15 or so states,” he said. “Because we have to win, and I want my energy to be put into states where it could go either way.”

Trump still faces the daunting task of unifying skeptical Republicans, with turmoil continuing to dog his campaign as conservatives grapple with their party’s direction.

Democrats have gleefully highlighted Republican anxiety about their nominee.

Speaking in Japan, Obama plunged into the fray, telling reporters that world leaders are “rattled” by some of Trump’s policies.

“A lot of the proposals that he has made display either ignorance of world affairs or a cavalier attitude or an interest in getting tweets and headlines,” Obama said.

“We’ll have great relationships with these countries. But if they’re rattled in a friendly way, that’s a good thing, John. Not a bad thing,” he told a reporter.

Trump will likely face Hillary Clinton in November, and the Democrat weighed in on Trump securing the Republican nomination.

“This man, who is an unqualified loose cannon, is within reach of the most important job in the world,” she told MSNBC.

“Of course they’re rattled,” she said of foreign leaders.

“He’s talking about breaking up our alliances, letting more countries get nuclear weapons, banning all Muslims from coming to America. That is a recipe for fewer friends and more enemies that will make us all less safe.”

The provocative Republican has struggled to win the support of key establishment figures, including House Speaker Paul Ryan, who have voiced concern about Trump’s tone and his lack of policy specifics.

“What I’m most concerned about is making sure that we actually have real party unity, not pretend party unity,” Ryan told reporters Thursday in Washington.

The former reality TV star has dominated headlines since launching his presidential campaign with a mix of incendiary comments and policy stances seen as insulting Mexicans, Muslims and women among others.

He has proposed building a giant wall along the US border with Mexico to keep out illegal immigrants, and called for a ban on Muslims entering the United States.

Trump has also raised eyebrows by continuing to attack members of his own party. On Tuesday, he assailed popular New Mexico Governor Susana Martinez — someone who could help him win over both Hispanics and women — saying she was not doing a good job as governor.

And the business mogul has shown his national political director the door just six weeks after hiring him.

Clinton meanwhile is set to clinch her party’s nomination following California’s June 7 primaries, but she remains locked in a battle with challenger Bernie Sanders.

And while Trump has pivoted toward his likely matchup against Clinton, knocking her “bad judgment” in violating rules against using a private email account while secretary of state, he mocked her struggle to put Sanders away.

“Here I am watching Hillary fight and can’t close the deal. And that should be such an easy deal to close,” he said.