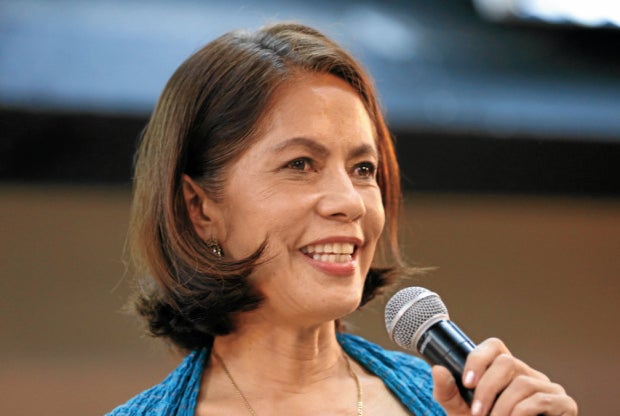 ON HER first day in office, Environment Secretary Regina “Gina” Lopez found herself in the hot seat, answering questions on her controversial stance against mining.

In her first press conference at the Department of Environmental and Natural Resources (DENR), Lopez’ first interrogators were proresponsible mining students, who had, ironically, gifted her with a metal pot.

The pot was in reference to a video circulating online in which a promining advocate had attempted to humiliate the environmental activist by asking if she used materials such as kaldero (pots), which are mineral products.

One of the Mining Engineering students, who introduced himself as an “advocate of responsible mining” had questioned Lopez about the accuracy of her data, calling it “misinformation,” to which Lopez countered: “There’s nothing I said that is not the truth.”

“I don’t want to fight with you … I’m not against the mining industry. I use a cell phone, I have an iPad. We all use it. However, I am against suffering,” Lopez said.

“Responsible mining is people must not suffer,” Lopez told the student. “You want to be a mining engineer? My request to you is to do your job with integrity … The No. 1 [priority] is that you should not let people suffer … You cannot build an economy based on suffering.”

Lopez later announced that within the day, an order will be issued for an audit or assessment on existing mining operations in the Philippines, as suggested by President Duterte.

Lopez also cited as one of her priority goals the exploration of the country’s biodiversity, “such that communities that live there benefit.”

“I would like to keep biodiversity and not let it be raped by any interests, because it belongs to the Filipino people,” Lopez said.

“The country with the most endemicity per unit area is the Philippines. We have the most flaura and fauna exclusive to this country,” she said.

She cited Batangas as “the center of marine biodversity in the planet,” and Sibuyan, Romblon, for having the densest forest on Earth.

Lopez also disclosed her campaign for reforestation, and her plans to initiate programs and environmental summits for impoverished sectors and the youth.

In an interview, Lopez said the companies which fail the audit—“those which cause suffering” or “those who don’t follow the rules”—would be closed.

When asked about possible conflict with Cabinet members with mining interests, she said: “As long as we’re on the same page, which is love for country, we’ll see what would be best.”

She said she was willing to meet with mining industry players.
RELATED VIDEO