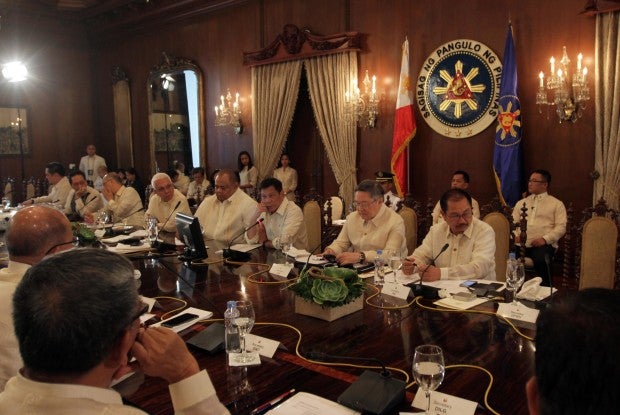 Forget special treatment and put an end to online gambling.

These are two of Rodrigo Duterte’s first marching orders to the members of his Cabinet as he spelled out his plan of government to them hours after he took his oath as the 16th President of the Republic.

“Not because of anything, I don’t want to be treated as important. We should treat ourselves just like any other Filipino traveler,” Mr. Duterte told his Cabinet secretaries at their first  meeting in Malacañang.

“I don’t want special treatment. There’s no stopping of activities just because of somebody,” he said in English and Filipino.

As if mimicking his predecessor’s “no wangwang” (no siren) policy, Mr. Duterte ordered Transportation Secretary Arthur Tugade to instruct the Civil Aviation Authority of the Philippines to scrap the “no-fly zone” protocol at the airports to accommodate presidential flights.

A 30-minute delay in the flights to give way to an inbound or outbound VIP flight may lead to the cancellation of other flights, particularly in airports that don’t have nighttime runway operations, he said.

“I want this stopped,” he said. “We should not be treated different from the other suffering Filipino passengers. It’s not good.”

“If anyone of us is given priority to takeoff, then we should thank them. But we should also share everyone’s travail. We should fall in line,” he added.

The President said he planned to take commercial flights in going around the country. He said he was not keen on buying a private plane despite offers from some supporters.

Said the President: “In the meantime, we have to remedy the overcrowding at Naia. We really have only one airport. It’s Naia. Period. And it services the entire country and all of the airplanes going to Manila.”

Like his previous late-night press briefings, Mr. Duterte’s meeting with his Cabinet, the first few minutes of which was aired live by the state-owned People’s Television Network, was a freewheeling discussion on a hodgepodge of topics.

From talking about the sorry plight of the country’s airports, Mr. Duterte shifted to his experiences in bringing assistance to Leyte province after the province was flattened by Supertyphoon “Yolanda” (international name: Haiyan) in November 2013.

He said he was dismayed at the government’s response to the disaster, noting that not one of the Navy’s vessels was deployed when he arrived in Tacloban City a few days after the powerful typhoon struck.

“What really surprised me, bewildered me, was when I met a soldier who asked me, ‘Mayor, do you have water?’ I knew then that it was the problem,” Mr. Duterte said.

“I am not trying to condemn anybody but…,” he said. “So the resources must be on deck, positioned nearby. If you can draw the path of the typhoon and deploy the assets of the government, what’s important is that there’s clean water and (ready-to-eat) food.”

Mr. Duterte then went on to discuss his plan to curb online gambling and the activities of “fixers” in government agencies, particularly the Land Transportation Office (LTO).

The President said he would order the Philippine Amusement and Gaming Corp. (Pagcor) to rescind the permits that the previous administration had awarded to companies operating online gambling.

“Online gambling must stop… I don’t want the proliferation of gambling in the country,” he said.

The President also reiterated his disgust at the sight of people lining up at government offices to submit documents or ask for  state assistance.

Instead of wasting their time lining up, he said,  stubs should be given to people who are submitting documents or applying for permits.

“I don’t want to see Filipinos queueing, lining up,” he said. “They should be given a shopping list if they’re ignorant or don’t know anything. Then after completion, they will go there for their application or clearance.”

The President disclosed his plan to set up emergency hotline 8888, which would be manned by 10 telephone operators tasked to assist people during emergencies.