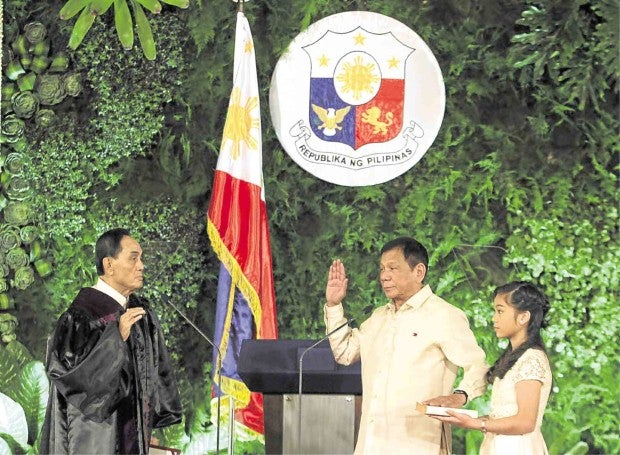 Tough-talking Rodrigo Duterte warned of a “rough ride” after being sworn in as the 16th President of the Philippines on Thursday, promising a relentless war on crime and corruption, but also to be a unifying leader.

Mr. Duterte, 71, was elected in a landslide last month after a three-month campaign dominated by foul-mouthed threats to kill tens of thousands of criminals and tirades against the nation’s elite that cast him as an incendiary, antiestablishment hero.

After taking his oath before Supreme Court Associate Justice Bienvenido Reyes in Malacañang at noon on Thursday, ending the term of Benigno Simeon Aquino III, Mr. Duterte indicated that there would indeed be some dark days during his six years in office.

Wearing an ecru barong Tagalog over brown pants and addressing a small audience that included leaders of Congress, the judiciary and members of the diplomatic corps, Mr. Duterte recalled his campaign promise to bring change, but said change must not come from him alone but from all Filipinos as well.

He said his words were not just meant to gain the voters’ approval, but to set the direction of his administration.

“These were battle cries articulated by me [on] behalf of the people hungry for genuine and meaningful change. But the change, if it is to be permanent and significant, must start with us and in us,” he said in a short speech, with his opening remarks focused on familiar themes about the need to instill discipline in a graft-ridden society.

“To borrow the language of F. Sionil Jose, we have become our own worst enemies. And we must have the courage and the will to change ourselves,” he added.

Mr. Duterte made it clear that the pursuit of change would be a strenuous effort.

“The ride will be rough but come and join me just the same. Together, shoulder to shoulder, let us take the first wobbly steps in this quest,” he said.

At the same time, he vowed to forge ahead with the restoration of the Filipinos’ lost and faded values—love of country, subordination of personal interests to the common good, concern and care for the helpless and the impoverished.

He vowed to deal with the country’s pressing problems—rampant corruption, criminality, illegal drugs, and the breakdown of law and order—but pointed out that these stem from the deeper issue of the people’s loss of confidence in the government.

Erosion of trust in gov’t

He added: “Indeed ours is a problem that dampens the human spirit. But all is not lost.”

No government can survive without the citizens’ support, he said, promising to listen to the people’s concerns and to restore their belief in their leaders.

“It is the people from whom democratic governments draw strength and this administration is no exception. That is why we have to listen to the murmurings of the people, feel their pulse, supply their needs and fortify their faith and trust in us whom they elected to public office,” he said.

The President said his fight against crime would be “relentless and sustained,” as he called on human rights monitors and critics in Congress to respect the mandate the Filipino people have given him.

But he also insisted he would work within the boundaries of the law.

“As a lawyer and former prosecutor, I know the limits of the power and authority of the President. I know what is legal and what is not. My adherence to due process and rule of law is uncompromising,” he said.

The first President from Mindanao sought to portray himself as a unifying figure.

“I was elected to the presidency to serve the entire country. I was not elected to serve the interest of any person or any group or any one class,” Mr. Duterte said. “I serve everyone and not only one.”

He said he adopted as his “article of faith” a line from a person whose name he could no longer recall: “I have no friends to serve, I have no enemies to harm.”

Toward that end, the President issued his first order to his Cabinet, directing the heads of departments to cut the red tape and poor service that has characterized the bureaucracy.

They should reduce requirements and the processing time of all applications, and remove redundant requirements, he said.

He also warned them against playing around with government contracts and projects that have already been approved and awaiting implementation.

“Changing the rules when the game is [going on] is wrong,” he said.

Dealings should also be transparent from start to finish, as he abhors secrecy, and those who dare defy him can say goodbye, he said.

“Do them and we will work together. Do not do them, we will part sooner than later,” he said.

To set the tone for his economic, financial and political policies, Mr. Duterte quoted Franklin Delano Roosevelt: “The test of government is not whether we add more to the abundance of those who have much; it is whether we provide for those who have little.”

During the campaign period, Mr. Duterte picked fights with envoys of key allies the United States and Australia after they criticized his campaign joke about wanting to be the first to  rape a “beautiful” Australian missionary who was sexually assaulted and killed in a prison riot in Davao City in 1989.

After his electoral victory, Mr. Duterte also launched a seemingly unprovoked attack against the United Nations over criticism of his human rights record in Davao.

But in his inaugural speech on Thursday, Mr. Duterte offered a muted message of friendship to the international community.

“On the international front and community of nations, let me reiterate that the Republic of the Philippines will honor treaties and international obligations,” he said.

On the domestic front, he vowed to implement all signed peace agreements and promised to pursue an inclusive peace.

“I am elated by the expression of unity among our Moro brothers and leaders, and the response of everyone else to my call for peace. I look forward to the participation of all other stakeholders, particularly our indigenous peoples, to ensure inclusivity in the peace process,” he said.

Mr. Duterte ended his speech with impromptu remarks to convey his commitment to his new job, underscoring his penchant for deviating from tradition or protocol.

“Why am I here?” he asked. “I am here because I love my country and I love the people of the Philippines. I am here, why? Because I am ready to start my work for the nation.” With a report from AFP