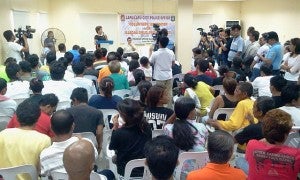 CEBU CITY — Close to a hundred suspected drug users and dealers from the cities of Lapu-Lapu and Mandaue went to various police precincts to surrender.

Senior Supt. Arnel Libed, who earlier received information from his precinct chiefs about the mass surrender, held a program on the third floor of the Lapu-Lapu City Tourism Building and invited former drug addicts to share their testimony.

Mayor Paz Radaza expressed hope that those who surrendered would support their campaign against illegal drugs. She said livelihood programs would help them transition to legal, normal jobs.

Libed credited the mass surrender to their “Operation Tokhang” or “Toktok, Hangyo” (knock and ask to quit) program.

In Mandaue City, nine persons turned themselves in at various police precincts.

The suspects admitted being fearful of losing their lives in the intensified operations against illegal drugs, wherein many suspected drug dealers had ended up dead.  SFM