Believe it or not: Mendiola march ends inside Palace 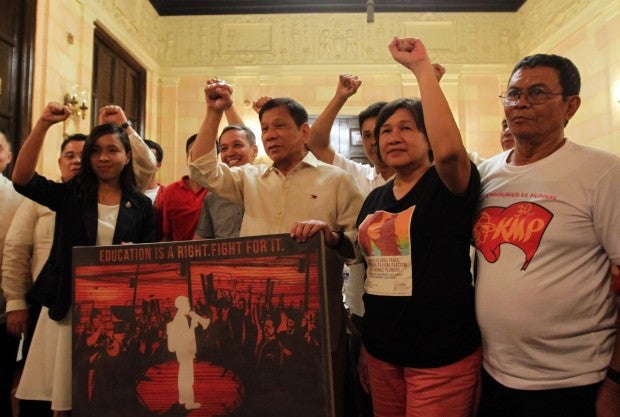 It was a surreal scene.

Activists who staged a rally at Chino Roces Bridge (formerly Mendiola) in Manila on Thursday were not greeted with a phalanx of truncheon-wielding policemen behind barbed wires or shooed away with water cannon.

They neither delivered fiery speeches denouncing the administration nor burned an effigy of the sitting President.

Instead, the activists gathered at the bridge, scene of bloody rallies in the past, to express their support for President Rodrigo Duterte.

Just minutes after Duterte delivered his speech as the 16th Philippine President, Renato Reyes, secretary general of the Bagong Alyansang Makabayan (Bayan), extended his greetings to the former Davao City mayor in front of some 3,000 people.

“We have that fervent hope that he will keep his promises of change for the Filipino people,” Reyes said to cheers from the crowd.

Reyes said in an interview that the “most important” part of Duterte’s speech was his acknowledgment that there was a need to see the masses as a “foundation” and to listen to their grievances.

“Second is his commitment to continue the peace process. For us, …for the root of armed conflict to be addressed, there should be real reforms for our country,” he said.

Reyes said his group was hoping Duterte’s administration would be “productive” and that he would be “firm” since there were “still many forces that are against change.”

“The task of the President will not be easy. He will inherit corruption, too many human rights violations, including the massacre of farmers and indigenous peoples … He will inherit the prevalent contractualization, absence of true agrarian reform,” he said.

Antonio Tinio, representative of ACT Teachers, welcomed Duterte, saying people, especially the “millions and millions” who voted for him, were relying on him for “real change.”

Tinio said there were “some positive signs” that there would be “major” changes in policies, foremost of which is the resumption of peace talks with the National Democratic Front of the Philippines (NDFP), political arm of the Communist Party of the Philippines.

“Through this, the root of poverty, criminality, corruption in government, among other things, can be addressed. If this continues, hopefully we see real change that all Filipinos want,” he said.

Ferdinand Gaite, national president of the Confederation for Unity Recognition and Advancement of Government Employees, for his part, said there was a “beacon of hope” with the arrival of Duterte and with Aquino gone.

Surprising the activists, Mr. Duterte asked the Presidential Security Group (PSG) to fetch them from their rally site to bring them to Malacañang, according to Reyes.

The new President met with them and listened to their concerns.

Reyes said they discussed the issues of contractualization, mining, the release of political prisoners and freedom of expression with the President.

Mr. Duterte respects freedom of expression and is not against rallies, according to the Bayan secretary general.

Reyes asked the President if the militant groups could move their rallies closer to Batasang Pambansa in Quezon City during the State of the Nation Address (Sona).

“[The President] said, ‘Sure, no problem,’” Reyes quoted Mr. Duterte as saying.

Bayan and affiliated groups have expressed support for the President, after he appointed several of their allies to key posts in the administration.

But Reyes said militant groups would still hold rallies. Not all of their street protests have to be against the President, he said. These could be about people’s concerns or about incompetent members of the Cabinet.

At the meeting, Duterte reiterated his plan to release political prisoners, who are part of the NDFP negotiating team or are its consultants.

Cristina Palabay of Karapatan and Liza Maza of Makabayan brought up their wish that political prisoners who are sick be released on humanitarian grounds. They cited a prisoner, who is paralyzed after being struck by a bullet on the back and is no longer a flight risk.

As for mining, the President told them that existing guidelines must be adhered to and that he might draw the line on open-pit mining.

On contractualization, Reyes said the groups presented their proposal to revoke certain labor department orders that perpetuated the practice.

Former Anakpawis Rep. Joel Maglunsod has been appointed labor undersecretary and would attend to the matter, Reyes added.

Reyes said the meeting with the President was not planned. The groups had invited him to attend a people’s summit they were hosting, but Mr. Duterte was unable to go because he had to prepare for his inauguration.

During the rally on Thursday, they learned that Mr. Duterte chose to see them in the Palace instead.

Reyes said they were not even dressed for the occasion and arrived in Malacañang in their rally clothes of jeans and T-shirts as barong and Filipiniana-clad inauguration guests were leaving.