Addressing the uncertainty of the international community, President Rodrigo Duterte on Thursday made it clear that he will uphold all international agreements. The same goes for existing peace pacts in the country.

Duterte, who took his oath of office in Malacañang, added, “In the domestic front my administration is committed to implement all signed peace agreements and set institutional and legal reforms.”

“I am elated by the expression of unity among our Moro brothers and leaders and the response of everyone else to my call for peace,” he said. “I look forward to the participation of a lot of stakeholders, particularly our indigenous peoples to ensure inclusivity in the peace process.”

Duterte, the first President from Mindanao, has vowed to bring real peace in the South amid the proliferation of armed groups, some linked to international terrorists. 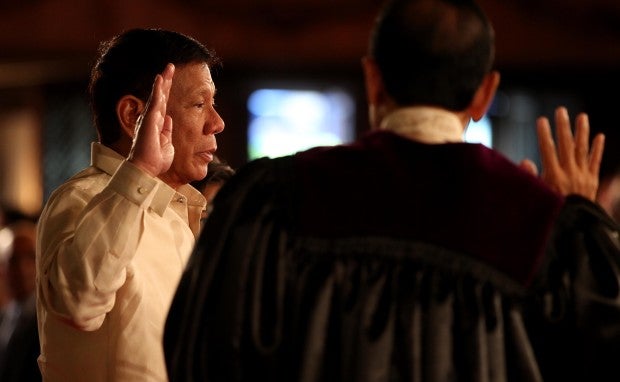 He also has close ties with the Communist Party of the Philippines, which is waging the longest-running communist insurgency in Asia.

Before he was sworn into office, his representatives already met with leaders of the National Democratic Front, CPP’s political arm, to discuss the prospects of peace.

“Let me remind in the end of this talk that I was elected to the presidency to serve the entire country. I was not elected to serve the interest of any person or any group or any one class,” Duterte told more than 600 guests at the President’s Hall in Malacañang.

“I serve everyone and not only one,” he said. CDG/rga