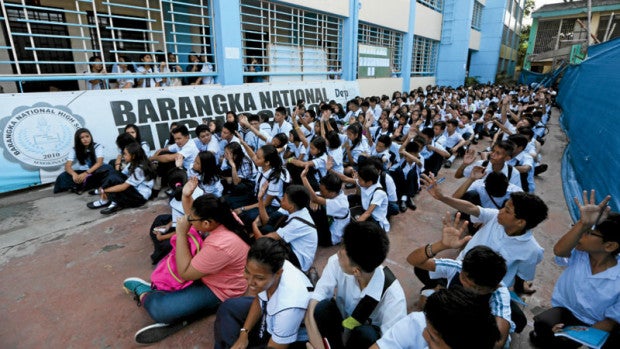 Except for some “minor” problems, outgoing Education Secretary Armin Luistro said the first day of the implementation of the senior high school (SHS) program made the opening of this school year “one of the best.”

Despite the full implementation of the K to 12 program being met by protests, Luistro said that based on the Department of Education (DepEd)’s monitoring, they have not seen any glitches that are difficult to address.

Luistro said this during his inspection at Commonwealth High School in Quezon City with the incoming Education Secretary and former National Treasurer Leonor Briones on Monday.

(For me, this is one of the best openings of a school year. I didn’t hear reports, even from the media, about big or widespread problems.)

Both Luistro and Briones, an appointee of President-elect Rodrigo Duterte, urged the public to cooperate with them and to give the new education system a chance.

In different areas, protests were held early Monday to oppose the K to 12 implementation. Youth for Nationalism and Democracy (YND) held a protest in front of the DepEd office slamming the government for commercializing education.

Meanwhile in Pasig City, teachers of Rizal High School held a “silent protest” against the school principal for pushing through with the K to 12 implementation despite the lack of facilities, teachers and books for senior high school students. JE