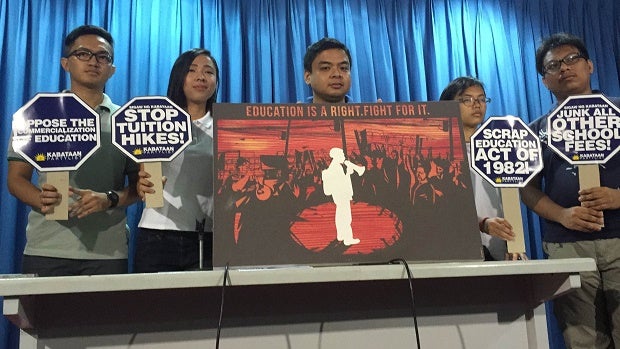 Outgoing Kabataan Rep. Terry Ridon and party-list first nominee Sarah Elago lead the unveiling of a painting emblazoned with the words “Education is a right. Fight for it.” They plan to give the painting to presumptive president-elect Rodrigo Duterte. PHOTO BY MARC JAYSON CAYABYAB/INQUIRER.net

Militant students from Kabataan party-list on Tuesday urged presumptive President Rodrigo Duterte to stop the implementation of the K to 12 program.

In a press conference, outgoing Kabataan Rep. Terry Ridon and party-list first nominee Sarah Elago led the unveiling of a painting by graphic artist Ivan Reverente emblazoned with the words “Education is a right. Fight for it.”

The painting, which they plan to give to Duterte as a gift, was a cover for the University of the Philippines Diliman campus publication Philippine Collegian.

Ridon said he lauded Duterte for opening the possibility of reviewing the full implementation of the K to 12 program under his administration.

Duterte had asked for a month to review the education program.

He added that it may be within Duterte’s powers as President to stop the implementation of  Republic Act 10533 or “Enhanced Basic Education Act of 2013, which extended the secondary education by two more years.

“If he orders the Department of Education to stop the implementation despite the law, I think it’s something he can do within his power,” Ridon said.

For her part, National Union of Students of the Philippines president Elago, the incoming Kabataan representative as its first nominee, also lauded Duterte for being open about scrapping the additional expenses for public school students, such as the use of school uniforms.

Elago said he hoped Duterte would veer away from the present administration’s policy of treating the education sector like business.

(Mr. President, the youth is approaching you with full of hope on your promise that change is coming, that the looming change will be for the youth, citizens and country.)

She also urged Duterte to fight for free public school education at all levels.

League of Filipino Students secretary general Aries Gupit said the K to 12 program would lead to more dropouts, with 700,000 to one million students forced to go to private schools which offer senior high school.

He said only two of 10 schools in Metro Manila are public schools.

During its first year of full implementation this year, the additional years of primary education displaced tertiary schools of incoming first year students for at least two years.

The program aims to make the country’s education system at par with other more developed countries, despite additional cost to families and problems on educational infrastructure. RAM/rga

Give us a chance, Duterte camp asks critics

Read Next
Man found dead after suspected ‘rough sex’
EDITORS' PICK
What to watch out for when selecting a video surveillance solution
DOH says COVID-19 cases plateauing, but public shouldn’t be ‘complacent’
House energy committee chair Arroyo bats for cheap electricity
Unleash the photographer in you this World Photography Day with vivo smartphones
23,000 cops to be deployed nationwide for school reopening
Look Through: The fate of impounded stray dogs
MOST READ
Sharon Cuneta asks for prayers for friend in ICU who suffered silent stroke
Light therapy could be the answer to your sleep problems
Korina Sanchez reunites with former ABS-CBN co-anchors Julius Babao, Cheryl Cosim
Solons file resolutions seeking probe on ABS-CBN, TV5 merger
Don't miss out on the latest news and information.