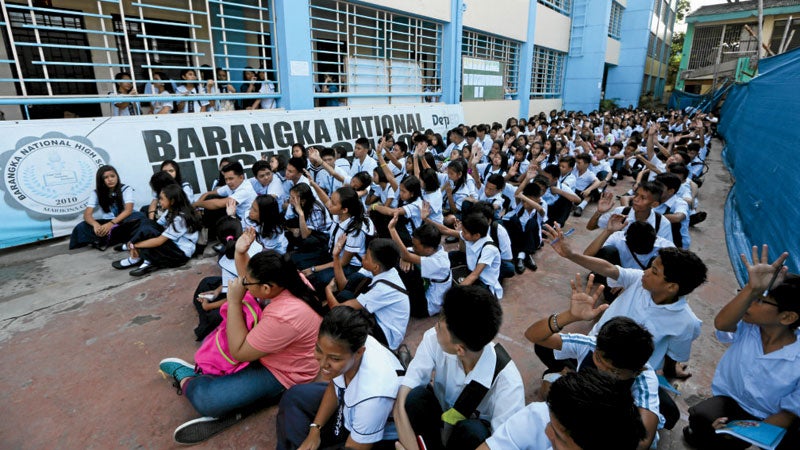 MORE than 11,000 private and public schools nationwide are prepared to open their doors to an estimated 1.5 million students for the pioneer batch of the Senior High School (SHS) program, marking the full implementation of the Aquino administration’s landmark K-12 education reform program.

But as of Sunday, only half of the expected number of enrollees had registered, fueling fears by militants that the program would only result in massive dropouts because of the high costs involved.

Some 1.3 million of these students are from public schools while around 200,000 are from private schools.

The Department of Education (DepEd) said these students would be accommodated in 5,990 public schools and 5,046 private schools, public and private universities and colleges, and technical-vocational institutions nationwide.

The students will be taken in in more than 57,000 program offerings in four tracks, namely, the academic, technical-vocational livelihood, sports, and arts and design.

“These programs offer our incoming senior high school students real choices, consistent with the intention of the K-12 program, which is to make education learner-centered, inclusive, competence-based and responsive to the needs of the community,” Assistant Education Secretary Elvin Uy said in a statement on Sunday.

Filipino, literature, mathematics and science, among others) have the same content and competencies for all Grade 11 students.

The applied track subjects, on the other hand, contextualize the content to suit each track and strand, while the specialized subjects have a varied set of competencies based on the student’s chosen track, strand or tech-voc specialization.

As of 4 p.m. Sunday, the DepEd’s online enrollment system had recorded 600,000 students for the SHS program.

While this number indicated that barely half of the expected students had enrolled, Assistant Secretary Jesus Mateo said this was because of the “slow transmission” of data and that this only covered public schools.

“The low enrollment in SHS only shows how great a burden K-12 is for students and their families. Imagine a minimum wage earner suddenly facing the problem of enrolling his or her child in a private school because of the way K-12 was set up,” incoming Kabataan Rep. Sarah Elago said in a statement.

She pointed out that this also showed that the DepEd’s voucher program, which subsidizes a student’s SHS education by as much as P22,500, had “failed to persuade students to enroll.”

“For students forced to enroll in private schools due to the lack of public senior high schools in their area, this means they still have to shell out money since many schools charge upward of P30,000 in tuition and other school fees,” Elago said.

The Center for Women’s Resources (CWR) said  poor families earning P292 daily would have to save at least P113 a day, or 39 percent of their income, to send their children to SHS.

And since, women account for an average of 48 percent of students, it said women would bear the brunt of not having the chance to attend SHS.

“With such policy, the sustainable development goal of empowering women and eradicating inequality will hardly be achieved when more than half a million girls are deprived of education,” CWR executive director Jojo Guan said in a statement on Sunday.

Mateo, however, stressed that the SHS program must be considered an investment.

He stressed that the country was part of the global community. And with the recent Association of Southeast Asian Nations integration, he said Filipinos would be at a disadvantage if its basic education system was not at par with global standards.

“[SHS] will equip our students with the knowledge and skills that will help prepare them better for their chosen path, may it be higher education, employment or entrepreneurship,” he said, pointing out that even without the

K-12 program, there had been a significant drop in college enrollment in the second year.

Education Secretary Armin Luistro said that while the SHS program might not be perfect, its implementation must proceed as it was already a long overdue reform program.

He noted that the department was open to feedback for it to continuously improve on its work.

While incoming Education Secretary Leonor Briones has expressed support for the program, which added two more years to the 10-year basic education system, militant groups aren’t giving up on their call to President-elect Rodrigo Duterte to look into the program and halt its implementation.

“We ask incoming President Duterte and Education Secretary Briones to heed the demand of the youth and the people to stop K-12. We demand that the incoming administration consider the students who completed Grade 10 as high school graduates and allow them to enroll in college,” said League of Filipino Students (LFS) secretary general Aries Gupit.

The LFS will ensure that the first years of the SHS program will be “marked with protests and walkouts,” he added.

Seeking the smooth opening of classes while overseeing the implementation of the SHS program, Luistro and Briones will jointly visit today Commonwealth High School in Quezon City.

Luistro said that should there be concerns on the implementation of the SHS program, the public could call their help desk at 6671188 and toll-free number 1800-1888-6349. The department can also be reached through e-mail [email protected]

As of Wednesday, the help desk has assisted over a thousand cases nationwide, mainly on the voucher program. With reports from Emichaella Añata and Evelyn Cruz