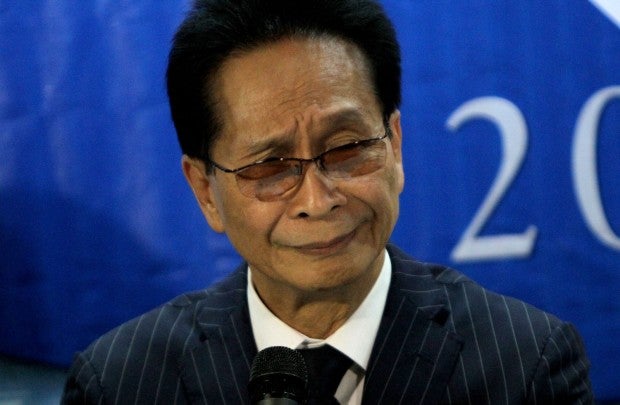 Panelo took to Facebook to deny the claim of a certain Clarisse Evangelista, who said the lawyer “didn’t budge” when a security guard asked him to move his car.

Panelo clarified that he asked the guard’s permission to park his car in the area to buy virgin coconut oil at a nearby drugstore.

“A certain Clarisse Evangelista, obviously a non-existent person as there is nothing in her account that suggests that she exists I.e. no photo, no personal circumstances, no information on her identity, posted in facebook an alleged incident that portrayed me as violating a no parking regulation in Greenhills Commercial Center and showing no remorse,” Panelo wrote.

“I parked my car infront of Mercury and Tropical Hot and sought permission from the security guarded posted there if could leave my car for a while as I wanted to buy a bottle of coconut virgin oil at the Mercury. The guard granted my request and told me that I could move the car infront of the Theater Mall parking zone so he could watched over it as soon as I bought the said item in the drugstore,” he added.

Evangelista also said Panelo brought out a tarpaulin of President-elect Rodrigo Duterte and put it on the hood of his car before walking away.

However, the lawyer said some Duterte supporters had asked a photo with him and requested that a Duterte sticker be placed on the hood so it can be included in the photo.

“After those selfies I bought the said item at the Mercury and in less than 5 minutes I returned to my car and the guard guided me to park my car in front of the Theater Mall where the guards allowed other car drivers to park their cars. That’s what happened,” he said.

“There was no such violation of any parking regulation nor was there any exhibition of any form of arrogance. Evidently the person posting such false narration of an incident intended to put my image into bad light and picture me as abusive. Obviously too the person is an anti Duterte basher who converted a casual incident into a false and malicious narration of an event with the purpose of maligning my person,” Panelo added.

Panelo said he was not surprised by the “falsity and bashing,” as an incoming presidential spokesperson.

“I consider such wrongful imputation as an occupational hazard. Nothing however can deter me from pursuing my job no matter the presence of such brick brats,” he added. RAM/rga