newsinfo / Nation
Nation
'Murder is no joke. Neither is press freedom' 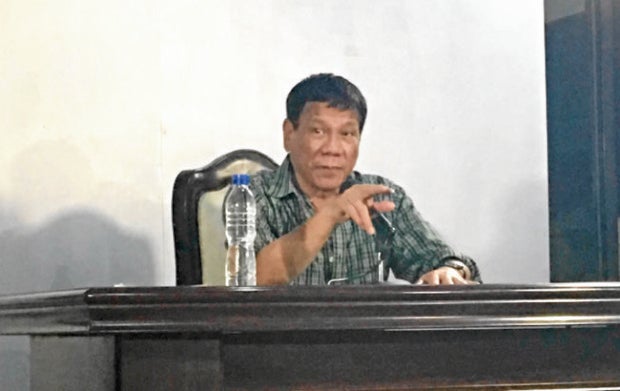 President-elect Rodrigo Duterte during a press conference after his first cabinet meeting at the Malacañang of the South in Panacan, Davao City. PHOTO BY TARRA QUISMUNDO/INQUIRER FILE PHOTO

A journalist group slammed the appalling statement made by President-elect Rodrigo Duterte on journalist killings.

“It is appalling that President-elect Rodrigo Duterte should justify the murder of journalists in the country by playing the corruption card,” the National Union of Journalists of the Philippines said in a statement.

Duterte, in a press conference on Tuesday, made a sweeping declaration that journalists are being murdered because they are corrupt.

He even said that the Constitutional right of freedom of expression cannot save journalists.

“Freedom of expression won’t save you. The Constitution cannot help you kapag binaboy mo ang isang tao (if you have corrupted a person),” the President-elect said.

NUJP said that while it recognizes that corruption in the media is one of the possible causes of journalist deaths, “it is a totally different thing to present this as a justification for taking life.”

The group said that the statements, even if made in jest, can be interpreted as a marching order by people who are against a critical press.

Just two days before Tuesday’s press conference, a member of Duterte’s transition team said that the President-elect is set to create a task force that will investigate media killings. Peter Laviña said that this move was prompted by the death of crime beat reporter Alex Balcoba.

Despite these pronouncements, NUJP said that Filipino journalists will “not be cowed from fulfilling [their] duty to act as the people’s watchdog.”

“Murder is no joke. Neither is press freedom,” it said.

In its report which was published last January, the International Federation of Journalists (IFJ) said that the Philippines is the second most dangerous country for journalists–placing it just after Iraq.

For the past 25 years, the IFJ noted that 146 journalists have been killed in the country. CDG