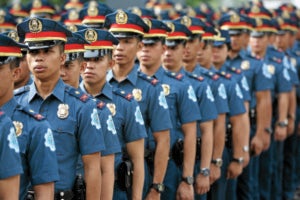 MANILA — After three years, police personnel affected by the 2013 Bohol earthquake and Yolanda supertyphoon — two of the worst calamities in recent Philippine history — are receiving some government assistance for rebuilding their homes.

On Monday, Interior and Local Government Secretary Mel Senen Sarmiento announced that he has signed a check worth P86.770 million, which will be disbursed to some 3,225 Philippine National Police (PNP) employees affected by the 7.2-magnitude earthquake in Bohol in October 2013, and supertyphoon Yolanda in November 2013.

In a statement, Sarmiento explained the amount came from the P218.380 million assistance from the President’s Social Fund (PSF), coursed through the Department of Interior and Local Governments, for 4,176 calamity-affected employees of the DILG and its attached agencies, including the PNP, BFP, BJMP.

Sarmiento said the disbursement for the police was only the first instalment. Another P86.770 million will be released after the liquidation for the first tranche is submitted to the Presidential Management Staff (PMS) and when the PMS recommends the release of the second instalment.

Sarmiento said the donation was for PNP employees whose houses were either partially, heavily or totally damaged in the Bohol earthquake and supertyphoon “Yolanda.” Through the PNP, the police beneficiaries can avail of the funds, or reimburse from it, from P30,000 to P100,000 each, depending on how damaged their houses were.

The deed of donation between the DILG and PNP for the first instalment was actually signed on March 28, but release of funds was delayed as donations were prohibited during the campaign period.

Meanwhile, the DILG, on Tuesday, also announced that it had released a total of P35.17 million in 2015 and the first quarter for 2016 for beneficiaries of deceased barangay officials.

Since 2002 until the first quarter of 2016, a total of P431.096 million has been released by the Department of Budget and Management to the DILG to settle the claims of the beneficiaries of some 31,771 deceased barangay officials, according to the records of the DILG National Barangay Operations Office.  SFM