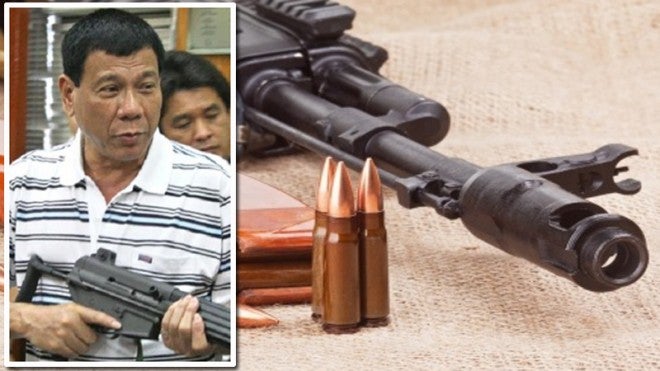 DAVAO, Philippines — President-elect Rodrigo Duterte said Tuesday that corrupt journalists were legitimate targets of assassination, as he amped up his controversial anti-crime crusade with offers of rewards for killing drug traffickers.

Duterte won this month’s elections by a landslide largely due to an explosive law-and-order platform in which he pledged to end crime within six months by killing tens of thousands of suspected criminals.

The foul-mouthed politician has launched a series of post-election tirades against criminals and repeated his vows to kill them — particularly drug traffickers, rapists and murderers.

In a press conference called on Tuesday to announce his cabinet in his southern hometown of Davao, Duterte said journalists who took bribes or engaged in other corrupt activities also deserved to die.

“Just because you’re a journalist you are not exempted from assassination, if you’re a son of a bitch,” Duterte said when asked how he would address the problem of media killings in the Philippines after a reporter was shot dead in Manila last week.

The Philippines is one of the most dangerous nations in the world for journalists, with 174 murdered since a chaotic and corruption-plagued democracy replaced the dictatorship of Ferdinand Marcos three decades ago.

“Most of those killed, to be frank, have done something. You won’t be killed if you don’t do anything wrong,” Duterte said, adding that many journalists in the Philippines were corrupt.

Duterte also said freedom of expression provisions in the constitution did not necessarily protect a person from violent repercussions for defamation.

“That can’t be just freedom of speech. The constitution can no longer help you if you disrespect a person,” he said.

Duterte raised the case of Jun Pala, a journalist and politician who was murdered in Davao in 2003. Gunmen on a motorcycle shot dead Pala, who was a vocal critic of Duterte. His murder has never been solved.

“If you are an upright journalist, nothing will happen to you,” said Duterte, who has ruled Davao as mayor for most of the past two decades and is accused of links to vigilante death squads.

“The example here is Pala. I do not want to diminish his memory but he was a rotten son of a bitch. He deserved it.”

One of the world’s deadliest attacks against journalists took place in the Philippines in 2009, when 32 journalists were among 58 people killed by a warlord clan intent on stopping a rival’s election challenge.

More than 100 people are on trial for the massacre, including many members of the Ampatuan family accused of orchestrating it.

Duterte has named Salvador Panelo, the former defense lawyer for the Ampatuans, as his presidential spokesman, a nomination criticized by the victims’ families and journalists’ organizations.

Duterte, who will assume office on June 30, also said he would offer bounties to law enforcement officers who killed drug traffickers.

He said three million pesos ($21,000) would be paid to law enforcers for killing drug lords, with lesser amounts for lower-ranking people in drug syndicates.

Outlining some of his other plans for his war on crime, Duterte said he would give the police Special Action Force shoot-to-kill orders and send them into the main jail in Manila where prisoners run drug trafficking operations.

Duterte also said he would enlist junior soldiers to kill corrupt top-ranking police officers who were involved in the drug trade.

“I will call the private from the army and say: ‘Shoot him’,” Duterte said.

He also urged police not to wait until he assumed the presidency, and start killing criminals immediately. “Now, now,” he urged them.

Police earlier confirmed killing 15 people in a series of drug raids across the country over the past week, which Amnesty International described as a sharp and sudden escalation in the long-standing problem of questionable deaths by Filipino security forces.