Only gov’t can be 3rd force in telco – Ang 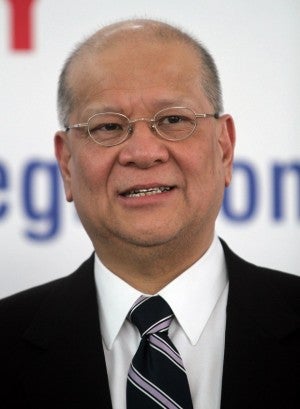 MANILA — Enter if you dare.

That was the challenge to new players coming from San Miguel Corp. president Ramon Ang, the last man that tried— and failed—to break into the country’s telecommunications business and challenge the powerful duopoly of Philippine Long Distance Telephone Co. and Globe Telecom.

That bid ended this week when SMC signed Monday a surprise deal to sell its telco unit to PLDT and Globe for for P69.1 billion, just two months after partnership talks between SMC and Australian telco giant Telstra Corp. Ltd. collapsed.

PLDT and Globe, which made the acquisition via a 50-50 arrangement, wanted SMC’s coveted radio frequencies— the lifeblood of the telecommunications sector.

So valuable were the assets that a key feature of that deal was the return of some frequencies to the government, giving it the option to auction these off to another challenger to the duopoly.

But Ang on Tuesday said subscribers should not hold their breath.

He was referring to looming legal battles PLDT and Globe had threatened to pursue, which made it difficult for SMC to secure a foreign telecommunications partner with expertise. The cost to roll out a telecommunications network can also be steep: the SMC Telstra venture’s capital spending was pegged at above $2 billion.

Ang said a government agency could assume the role of a third telco player, citing the Department of Science and Technology as an example.

The threat of legal action was raised after PLDT and Globe said it was unfair for SMC to be holding most of the 700 Megahertz spectrum, a radio frequency good for covering wide areas and inside buildings.

Both incumbents said they needed to improve internet services, which have been criticised for being both “slow and expensive” compared to regional peers. They also said they might sue the National Telecommunications Commission for failing to act on their pleas.

Some of the acquired frequencies to be returned by PLDT and Globe were in the 700 MHz, 850 MHz, 2500 MHz, 3500 MHz bands, which they claimed were sufficient for a third player to launch a service. The deal is still being reviewed by the National Telecommunications Commission and the Philippine Competition Commission.

Ang made the comments as he shared it was very “difficult” for SMC to give up its telco ambitions.

He also said the deal, which included about P17 billion in liabilities, was just “cost recovery” for SMC, which made an initial attempt to break into the business via wi-tribe high-speed internet service.

He said talks with PLDT and Globe for the sale of their telco unit started just two months ago. Ang said he wanted to avoid litigation, which would tie up their assets and delay the launch of their telco business.

“We wanted to make sure both PLDT and Globe will do this deal quickly, so they will be able to use the frequencies and provide better mobile services, which they were promising,” Ang said.

However, they made no guarantee that prices would come down, with either saying these were “in line” with regional peers or were already “affordable.”

Cu noted that prices have already come down since the entry of the Gokongwei family’s Digital Telecommunications Philippines Inc., which operates Sun, over a decade ago.

“When Sun came in, the price of a phone call was P4.50 and P7.50 and a text was P1. Today, P25 buys you unlimited calling to our network and unlimited texting to other networks,” he said.

He said this environment of lower prices and massive capital spending— to keep pace with increasing demand for data services as smartphone penetration has been growing rapidly— has made it difficult for a new player to enter.

Cu said bottlenecks in building new cell sites have slowed down expansion efforts, noting that they could only build about 500 cell sites annually.