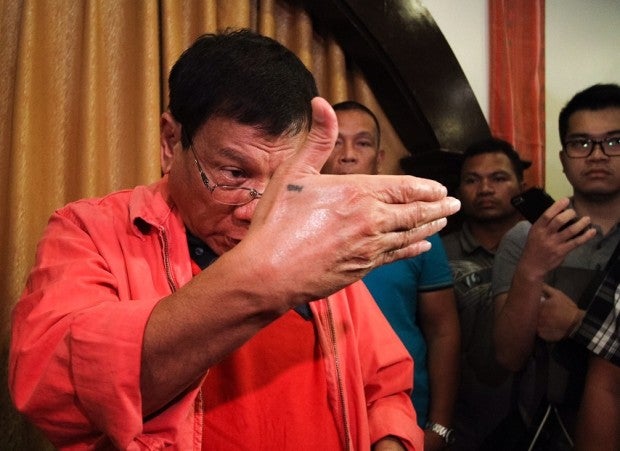 DAVAO CITY, Philippines — It’s final: Rodrigo Duterte will be a no-show when Congress proclaims him as the country’s next President on Monday.

“I am not attending any proclamation. I have never attended any proclamation in my life,” Duterte said in a media briefing at a hotel here in his home province late Saturday.

Instead, his lawyers will represent him in the proclamation deemed a historical moment for election winners, who are not required to attend the event.

On Monday, the Senate and House will reconvene in a joint session to proclaim the winners of the presidential and vice presidential races in the May 9 polls.

Senator Alan Peter Cayetano, Duterte’s running mate in the last campaign, also said that the outgoing mayor of Davao City had never attended any of his proclamations in his 30 years in public office.

“In all of my political aspirations, nanalo naman ako. Sabi ko nga baka God would want me to taste defeat but it never happened,” Duterte said.

Duterte’s executive assistant Bong Go said the mayor, whose term ends on June 30 as his presidency begins, might just give a message here in the province after the proclamation.

Robredo earlier said that she planned to speak with the incoming President during the proclamation to congratulate him and assure him of her full support./rga