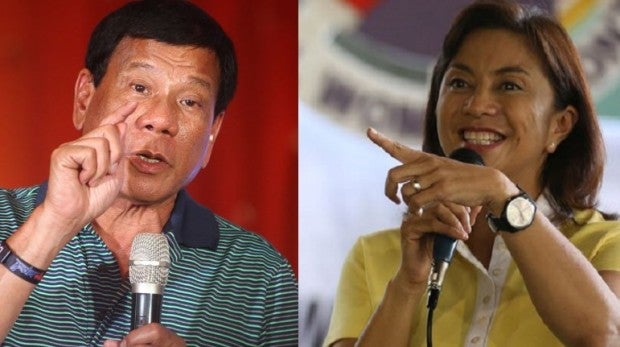 DAVAO CITY—A meeting between the new leaders of the country may happen as early as Monday as both camps of President-elect Rodrigo Duterte and Vice President-elect Leni Robredo have expressed willingness to discuss plans for the next administration.

Sen. Alan Peter Cayetano on Saturday said the camp of Duterte was planning to set a meeting with Robredo to discuss her role in the new administration.

This is after both Duterte and Robredo sealed their victory in what Cayetano called an emotionally charged election as the Congress finished canvassing the votes for president and vice president on Friday.

In an interview in Naga City, meanwhile, Robredo said she would find a way to pay a courtesy visit to Duterte and assure him of her 100 percent support for his administration.

Robredo said she planned to speak with Duterte on Monday during their proclamation in Congress. Duterte, however, said in previous interviews that he was not interested to attend a “corny” event like the president’s proclamation, which is deemed historic by many.

Cayetano, before hitting the court for a basketball game with Senator-elect Manny Pacquiao at Almendras Gym in this city, told the media that Duterte had been reviewing every day the names for the Cabinet posts, including the position which could possibly be given to the incoming Vice President.

During the campaign, the Liberal Party’s vice presidential candidate would always say in media interviews that instead of holding a Cabinet-level agency, she wanted to focus on streamlining antipoverty programs.

Robredo reiterated this during her Saturday interview in Naga. But she also maintained that she was not in the position to defy the President’s order should she be appointed to a Cabinet post.

Cayetano said they were aware of Robredo’s choice and that the new President himself would consider it as he studies the composition of the Cabinet members.

Cayetano also asked the erstwhile ruling LP to cooperate with the Duterte administration if ever the incoming President decides to include Robredo in his Cabinet.