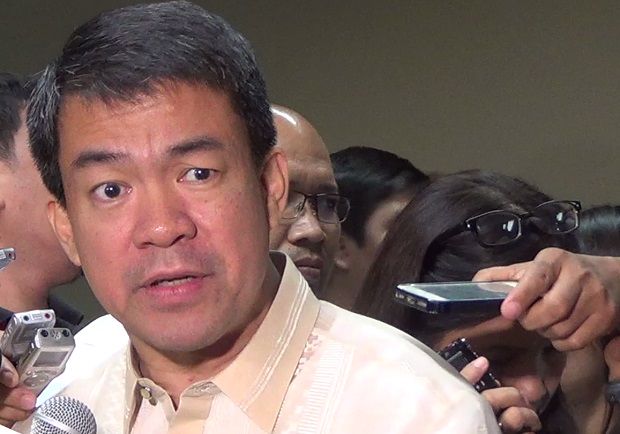 The request of vice presidential candidate Sen. Ferdinand “Bongbong” Marcos Jr. for a separate proclamation of the vice president is not legally prohibited but has never been done before, Sen. Aquilino “Koko” Pimentel III said Tuesday.

Pimentel, who arrived at the House of Representatives as a member of the canvassing committee, said in an interview with reporters that a separate proclamation of the vice president is “theoretically possible but in practice has never been done before.”

Pimentel said separate proclamations were done in the race for governor/vice governor and mayor/vice mayor.

He also said the law does not prohibit it.

“If you look at the other boards of canvassers, this has been done in time immemorial,” Pimentel said.

Pimentel gave this reaction after Marcos, who trailed in the unofficial count in the vice presidential race behind Camarines Sur Rep. Ma. Leonor “Leni” Robredo, called in a privilege speech for the proclamation of presumptive President-elect Rodrigo Duterte ahead of the vice president.

Marcos asked for more time in the vice presidential canvassing, claiming votes for him were shaved in favor of Robredo, candidate of the administration Liberal Party.

He said poll fraud was done by massive vote-buying and automated fraud in which votes for him were allegedly shaved and votes for Robredo increased.

Pimentel said Congress in a joint session Tuesday would approve the rules of canvassing, which would include the rules pertaining to Marcos’ poll fraud allegations.

However, Marcos’ camp should identify what particular certificate of canvass (COC) would show that there was cheating in the elections, Pimentel said.

“We will have to listen to objections. Nasa rules po yan (It’s included in the rules) to be approved this afternoon,” Pimentel said.

“The counsel for a candidate can object to a COC once it’s presented. You have to pinpoint which COC is affected by your allegation of irregularity or fraud or whatever is your allegation,” he added.

For his part, outgoing Mandaluyong Rep. Neptali “Boyet” Gonzales II, who is the Majority Leader, questioned how a separate proclamation of president and vice president can be effected.

He also cited what Sen. Juan Ponce Enrile earlier said in the previous elections that Congress sits as the National Board of Canvassers and not as a “board of inquiry” to hear evidence of poll fraud.

Gonzales said electoral protests should be brought  before the Supreme Court or the Presidential Electoral Tribunal.

“How do you effect that? … (Congress) sits as a board of canvassers, its mandate is to canvass. It’s not a board of inquiry,” Gonzales said.

“There’s only one COC, walang (there is no) separate COC for president and vice president. Hindi pwedeng bulag ka sa president, naka-dilat mata ka sa vice president (It would not be appropriate that you are turning a blind eye on the president while your eyes are wide open on the vice president),” he added.

Pimentel and Gonzales said they are the chairpersons of the joint canvassing committee for the House and Senate.

Under the 1987 Constitution, Congress in a joint session is tasked to canvass the votes certified by the board of canvassers of each city and province.

Congress will also proclaim the winning president and vice president.

According to the unofficial count of the electronically transmitted votes, Duterte of the Partido Demokratikong Pilipino-Lakas ng Bayan is the presumptive President-elect.

Robredo’s victory as vice president is being questioned by Marcos, who trailed behind her by a slim margin of around 200,000 votes. RAM/rga

Read Next
Duterte on being likened to Trump: ‘That son of whore!’
EDITORS' PICK
Smart celebrates all kinds of ‘#SimplyLove’ for Pride Month
Duterte to issue memo on face shields this week
Smart brings KCON:TACT especially 4U to subscribers from June 19 to 27
Gilas out to prove Korea win not a fluke; Tab fires back at ‘lucky shot’ remark
DOH reports 40 more COVID-19 variant cases
Young, Huerter help Hawks upset top seed Sixers in Game 7
MOST READ
Duterte to issue memo on face shields this week
No plot to oust Pacquiao as PDP-Laban president in July meeting — Nograles
Probe troll farms, lawmakers urge
PAL to ax some long-haul flights to slow bleeding
Don't miss out on the latest news and information.