Duterte on being likened to Trump: 'That son of whore!' | Inquirer News

Duterte on being likened to Trump: ‘That son of whore!’ 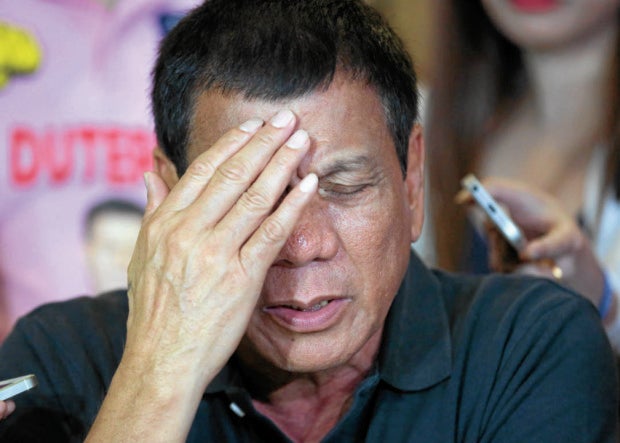 DAVAO CITY–Presumptive President-elect Rodrigo Duterte has been called many names during his ascent to the presidency such as “Dirty Harry” and “The Punisher” for his iron-fisted rule in this city for more than three decades. But being likened to presumptive United States Republican Party nominee Donald Trump doesn’t sit well with him.

Asked about his reaction to being called the “Donald Trump of Asia,” Duterte said: “T***** niya. (That son of a whore!)”

He maintained that one clear difference between him and Trump is that the latter is a bigot.

“Hindi naman ako bigot (I am not a bigot). He hates Muslims. From his assumption, wala nang makakapasok na Muslim (Muslims can no longer enter the United States),” the incoming President told reporters on Monday night.

READ: Duterte: Trump is a bigot, I am not

With the general elections in the US shaping up as a clash between Trump and Democratic Party’s Hillary Clinton, Duterte said that he wants to stay clear of the political affairs of other countries.

“Ayoko makialam doon sa pulitika nila, actually (To be honest, I don’t want to meddle in their political affairs)” he said.

When pressed to pick, he said that he will likely choose Clinton.

During the campaign, international media have often compared the tough-talking, firebrand Duterte to Trump. British comedian John Oliver even tagged the septuagenarian President-elect as “Trump of the East.”

Duterte has been famous for his devil-may-care way in uttering expletives and comments, some of which have sideswiped Pope Francis, the Filipino clergy, and an Australian lay missionary killed in a prison siege here in 1989.

Duterte won the May 9 polls with 15.9 million votes, according to partial and unofficial tallies—more than what current President Benigno Aquino III got in 2010. CDG/rga