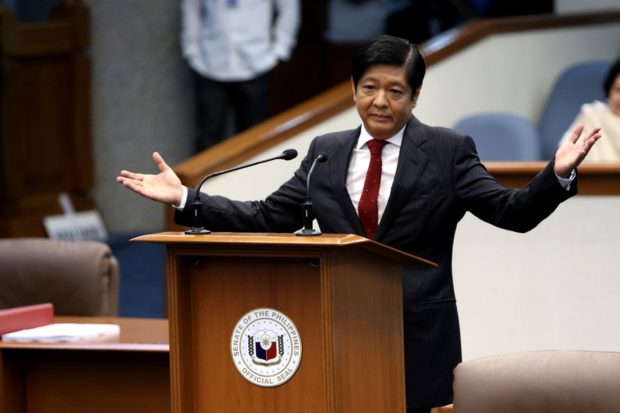 Vice-Presidential candidate Bongbong Marcos slams the Smartmatic for changing the script on the transparency server during privilege speech as the Senate resume session. INQUIRER PHOTO / RICHARD A. REYES

“As all other presidential candidates have conceded and no questions surround the votes he has received, I propose the immediate proclamation of our presumptive President Rodrigo Duterte, being the clear and uncontested winner in the presidential elections,” Marcos said in a privilege speech.

“Again, I offer him my sincere congratulations and my hand in partnership for the future. Mr. President, the Philippines now looks to you for your leadership and vision.”

“However, I humbly but firmly reiterate, my strong reservations in the canvassing of the results of the Vice-Presidential elections, on the basis of electoral irregularities on the two fronts that I mentioned,” he said.

The two fronts he was referring to were the “battle” on the ground level and in the field of computer science and programming.

In his speech, Marcos enumerated the alleged election offenses committed during the last May elections, such as “rampant vote-buying” and the reported programming change in the transparency server of the Parish Pastoral Council for Responsible Voting (PPCRV).

Netizens, he said, were able to capture footage and other evidence of cheating and other “abhorrent election offenses” from different parts of the archipelago.

“As captured by netizens through photos and videos, we see the same sad story in the Philippines. Vote-buying has become ever more rampant, as have been the acts of terrorism, threats and intimidation.”

“We have received reports of information and communications technology (ICT) companies that were engaged by candidates to boost their chances in winning the automated elections. Parts of the package included access to official voters’ database and vaunted “magic laptops,” which they claimed could tap into the Comelec’s main server,” the senator added.

Marcos  cited in particular the sudden change in a new script or computer command in the PPCRV server on or about 7:30 p.m. of May 9 or during the actual transmission of results from canvassing boards nationwide. He said Smartmatic’s Marlon Garcia admitted entering the new script.

“It was after this particular act of computer programming wizardry that votes for this representation started to slow down and the votes for another candidate started to accelerate — at an unprecedented and linear rate of 45,000 votes for every additional 1 percent of votes counted,” he said.

The senator said Garcia was the same person who was charged with electoral sabotage “for doing the very same thing during the 2013 elections.”

“What are the chances that this computer programming change can be linked to the odd pattern that emerged during the PPCRV quick-count? How sure are we that that the computer change did not open windows of opportunity for “trap doors,” “trojan horses,” “worms,” or “time-bombs” to enter the system?”

Marcos noted how Comelec chairman Andres Bautista claimed that the programming change in the transparency server was “nothing more” than a “cosmetic change” and that the same did not alter the results of the elections.

“What proof do we have of this? We have not seen any,” the senator said.

He said he already asked the Comelec to allow his IT experts to examine their servers but said he has not received any reply yet from the poll body.

“I have to ask myself: Why is Comelec turning a blind eye to the quantum of proof that is before them? Every day netizens post new photos and videos of election fraud. Police found thousands of pre-shaded ballots in an abandoned warehouse in Alaminos, Pangasinan. Unused SD cards were found in a trash can in Kabangkalan, Negros Occidental. There is video of election fraud in Datu Ampatuan, Maguindanao. And yet, Comelec has done nothing. They would rather concentrate on immediate proclamation in the hope that the uproar will die down soon after,” Marcos lamented./rga