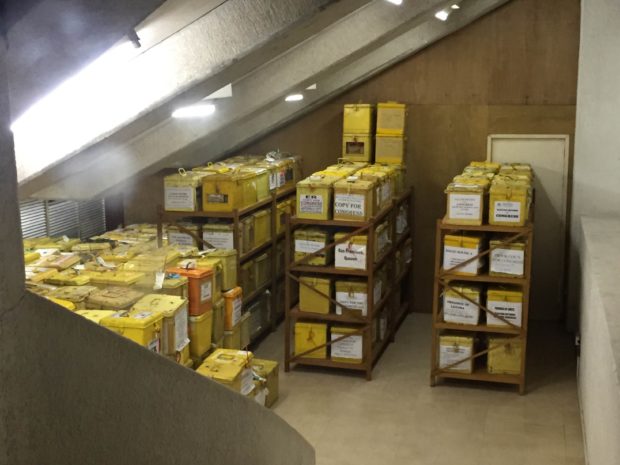 Around 600 ballot boxes which contain certificates of canvass and election results are secured in a room near the plenary hall of the House of Representatives for the canvassing of the votes for president and vice president. PHOTO BY MARC JAYSON CAYABYAB/INQUIRER.net

Around 600 ballot boxes were delivered to the House of Representatives in time for the start of the joint session of Congress for the canvassing of the votes for the presidential and vice presidential elections.

Military trucks delivered the ballot boxes from the Senate to the House of Representatives around 6 a.m. on Tuesday.

The House also received 58 pouches containing the certificates of canvass.

A tally board for the presidential and vice presidential election results was also set up near an entrance of the plenary hall, where the canvassing will take place.

The House and the Senate are set to conduct a joint session at 2 p.m. later to approve the rules of the canvassing.

The canvassing of votes will officially start on Wednesday.

Under the Constitution, Congress in a joint session is tasked to canvass the votes certified by the board of canvassers of each city and province.

Congress will also proclaim the winning President and Vice President.

According to the unofficial count of the electronically transmitted votes, Davao City Mayor Rodrigo Duterte of the Partido Demokratikong Pilipino-Lakas ng Bayan is the presumptive President-elect.

Read Next
Kicking the habit: Adult smoking rate in US is falling fast
EDITORS' PICK
Want to help local farmers? Shop small and eat Real Food
Manila is 78th most expensive city in the world for foreign workers
ICC is everything but a court of ‘white people’
Garcia softens stance, meets IATF halfway on swab-upon-arrival policy
Piolo Pascual: The Ultimate Heartthrob continues to level up
TeaM Energy pushes development programs to help in pandemic rebound
MOST READ
Sharon Cuneta on living in the US: ‘Nagagawa ko lahat ng normal na bagay’
Mike Nieto asks fans: ‘No below the belt remarks’ toward South Korea
ICC is everything but a court of ‘white people’
Duterte-Duterte tandem possible but ‘winnability is another question’ — Binay
Don't miss out on the latest news and information.