Obama reaches out to people a day after Vietnam arms deal 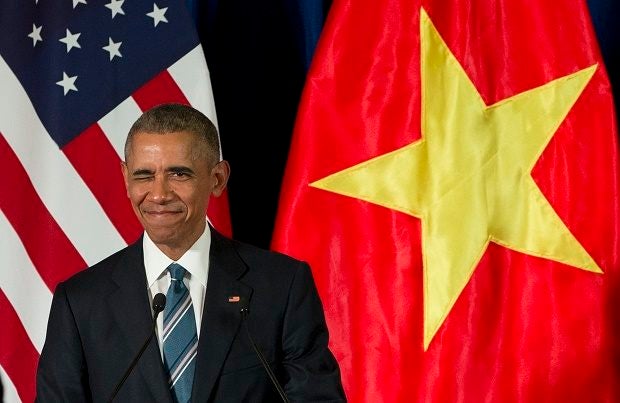 President Barack Obama winks as he arrives for a news conference with Vietnamese President Tran Dai Quang, Monday, May 23, 2016, at the International Convention Center in Hanoi, Vietnam. AP

HANOI, Vietnam — After knocking down one of the last vestiges of Cold War antagonism with a former war enemy, President Barack Obama on Tuesday took his push for closer ties directly to the Vietnamese people, meeting with activists and entrepreneurs. Amid the geopolitical statecraft, he faces calls to more strongly address what’s seen as an abysmal human rights record.

Obama spoke with 10 activists Tuesday, including advocates for the disabled, sexual minorities, a pastor and advocates for freedom of speech, press and the Internet, but he said that several others were prevented from coming.

“Vietnam has made remarkable strides in many ways,” Obama said, but “there are still areas of significant concern.”

He was to give a speech aimed at the people of Vietnam a day after announcing the lifting of a five-decade-old arms sales embargo that’s meant to help forge a new economic and security relationship with this young, fast-growing Southeast Asian nation.

Obama must balance a desire for a stronger relationship with efforts to hold its communist leadership to account over what activists say is the widespread abuse of dissidents.

From Hanoi, Obama was to fly Tuesday to Ho Chi Minh City, formerly Saigon. He planned a visit to the Jade Pagoda, considered one of the most beautiful pagodas in southern Vietnam and a repository of religious documents that includes more than 300 statues and other relics.

Shifting from the historical to the modern, Obama also planned to visit the Dreamplex business complex in downtown Ho Chi Minh City, a space for startup entrepreneurs that fits with Obama’s message about the potential benefits of closer ties to Vietnam’s growing economy and its burgeoning middle class.

Obama also planned to meet with entrepreneurs, letting him talk up the benefits of what he says will be enhanced trade under a 12-nation trans-Pacific trade deal that is stalled in Congress and opposed by the leading US presidential candidates.

During a Monday news conference with Vietnam’s president, Obama traced the arc of the US-Vietnamese relationship through cooperation, conflict, “painful separation” and a long reconciliation. “If you consider where we have been and where we are now, the transformation in the relations between our two countries is remarkable,” Obama said.

President Tran Dai Quang said later at a lavish state luncheon that he was grateful for the American people’s efforts to put an end to “an unhappy chapter in the two countries’ history,” referring to the 1965-1975 US war with Vietnam’s communists, who now run the country.

The conflict killed 57,000 American military personnel and as many as 2 million Vietnamese military and civilians.

Quang added that “the wounds of the war have not been fully healed in both countries.” Still, Quang said, both sides are determined to have a more cooperative relationship.

That mindset was evident in the friendly crowds that lined the streets as Obama’s motorcade zigzagged around Hanoi. When Obama emerged from a tiny Vietnamese restaurant after a $6 dinner with celebrity former chef Anthony Bourdain, he shook hands with members of the squealing crowd and waved as if reluctant to get back in the limousine.

Obama’s speech on Tuesday will stress the importance of having a “constructive dialogue,” even when the two nations disagree, including on human rights, a White House official said.

That is unlikely to mollify activists, who said the president had given up his best leverage for pressing Vietnam to improve its rights record by lifting the arms embargo.

Duy Hoang, US-based spokesman for Viet Tan, a pro-democracy party that is banned inside Vietnam, said that until Vietnam makes progress on human rights, the US should not sell it military gear that could be used against the population.

Vietnam holds about 100 political prisoners and there have been more detentions this year, some in the past week. Hanoi says that only lawbreakers are punished.

Obama said there had been “modest progress on some of the areas that we’ve identified as a concern.” He added that the 12-nation trans-Pacific trade deal that he’s pushing could help prompt Vietnam to implement a series of labor reforms “that could end up being extraordinarily significant.”

For Vietnam, lifting the arms embargo was a psychological boost. The United States partially lifted the ban in 2014, but Vietnam has repeatedly pushed for full access so it can better deal with China’s land reclamation and military construction in nearby seas.