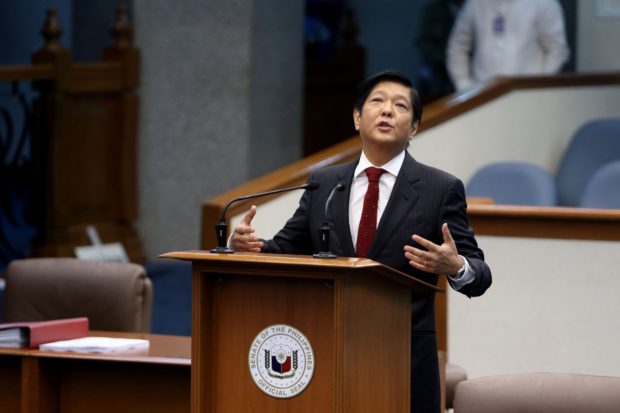 Vice-Presidential candidate Bongbong Marcos slams the Smartmatic for changing a script on the transparency server of the PPCRV as he delivers a privilege speech at the resumption of the Senate session on Monday, May 23, 2016 RICHARD A. REYES

SEN. FERDINAND Marcos Jr. on Monday sought the immediate proclamation of presumptive President-elect Rodrigo Duterte, but he expressed reservations about the canvassing of the results of the vice presidential race in which he was trailing Camarines Sur Rep. Leni Robredo.

At the resumption of the Senate session, Marcos delivered a privilege speech in which he questioned the alteration in the script of the transparency server of the Parish Pastoral Council for Responsible Voting (PPCRV) by a Smartmatic executive.

He congratulated Duterte for being the “clear and uncontested winner” in the presidential race and proposed his immediate proclamation by the joint session of Congress, which convenes today as the national board of canvassers for the presidential and vice presidential contests.

“However, I humbly but firmly reiterate my strong reservations [about] the canvassing of the results of the vice presidential election, on the basis of irregularities on the two fronts I mentioned,” Marcos said.

The automated elections have now seen people waging battle on two fronts—on the ground and in the field of computer science and programming, he said.

Asked by reporters after his speech whether he wanted a stop to the canvassing of votes for the vice presidential race until the issues against Smartmatic were resolved, Marcos said there were “places that needed to be checked before they be included in the canvassing.”

These places included the Autonomous Region in Muslim Mindanao where Marcos said his camp had received reports that people were not allowed to vote, that the board of election inspectors were turned away and that ballots were preshaded.

“There were also other places where all the vice presidential candidates except for Robredo got zero votes,” Marcos said.

In certain areas, he noted, members of Iglesia ni Cristo (INC) voted for him for fear that they might be removed from the indigenous religious group. INC, which is known to vote as a bloc, supported Marcos’ vice presidential run.

Marcos said there was undervoting that affected 3 million votes.

Asked whether his call to exclude certain areas from the canvassing would delay the proclamation, he said he did not know the effect “but we have to clarify these issues first.”

In his speech, Marcos said his votes “slowed down” and the “votes of another candidate”—in reference to Robredo

—“accelerated” after Smartmatic executive Marlon Garcia entered a new script in the PPCRV transparency server at about 7:30 p.m. of May 9.

He said the votes of Robredo accelerated “at an unprecedented and linear rate of 45,000 votes for every additional 1 percent of votes counted.”

When the PPCRV ended its unofficial quick count last week, Robredo was leading Marcos by more than 200,000 votes, with 96.14 percent of election returns counted.

Marcos said Garcia was the same person who was charged with electoral sabotage for making the same offense during the 2013 elections.

“How sure are we that the computer change did not open windows of opportunity for ‘trap doors,’ ‘Trojan horses,’ ‘worms’ or ‘time bombs’ to enter the system?” he said.

While Commission on Elections (Comelec) Chair Andres Bautista claimed that the programming change was a cosmetic one and did not alter votes, Marcos said the former did not show any proof.

The senator said he wrote the Comelec last week to allow his IT experts to examine its servers but as of Monday, the poll body had not replied.

After the speech, Sen. Bam Aquino, who happened to be Robredo’s campaign manager, stood up to question Marcos, asking whether the purpose of examining the Comelec servers was to find out if they were modified.

Marcos said he wanted to “check whatever happened.”

He also said that his inquiry was “not a fishing expedition” and that during the canvassing he would present evidence of irregularities and discrepancies that were reported to his camp.

Aquino pointed out that numerous academicians had said that there were no irregularities while only two academicians defended Marcos, prompting the latter to counter whether this was a race on who had the most number of academicians.

Concluding his speech, Marcos said he was not speaking about himself or his candidacy but “about our nation and our country’s future.”