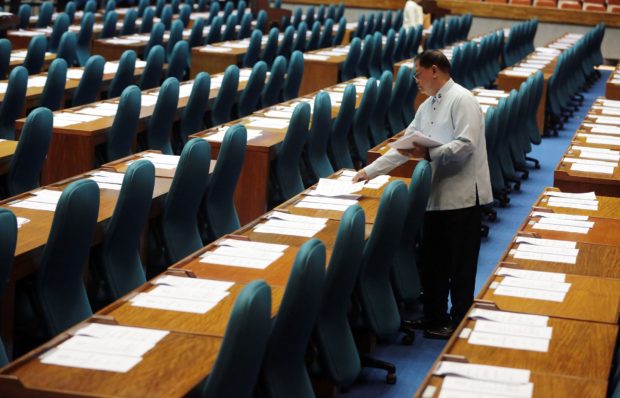 House of Representative personnel prepares the session hall for the resumption of the 16th Congress on Monday, May 23, 2016. GRIG C. MONTEGRANDE

Erstwhile LP stalwart Ilocos Norte Rep. Rodolfo Fariñas, for instance, took his oath as a  PDP-Laban member in preparation for his assumption as majority leader of the House of Representatives.

Another former LP member who took his oath as a PDP-Laban member was Camarines Sur Rep. Rolando Andaya Jr., who is reportedly being groomed to assume his old post as chair of the powerful House appropriations committee.

A political butterfly like many of his colleagues, Andaya switched from the LP to the Nationalist People’s Coalition (NPC) in October last year in preparation for the 2016 elections.

A number of LP members are jumping ship as some 80-90 of the 116 members of President Aquino’s political party in the House wanted to join the incoming Duterte administration’s Coalition for Change to be part of the majority but would like to remain affiliated with the LP.

A smaller number of LP members are expected to become the House minority and stick it out with Speaker Feliciano Belmonte Jr., who has already conceded the speakership fight to incoming Davao del Norte Rep. Pantaleon Alvarez of PDP-Laban, Duterte’s anointed Speaker.

But Alvarez was adamant that all House members joining the Coalition for Change switch to PDP-Laban, like Fariñas and Andaya.

“It will be best if they join PDP-Laban,” said Alvarez, who noted that it would be awkward if the LP would lead the House minority while the bulk of its members were allied with the majority.

Belmonte appealed to Alvarez on Monday that LP members who would align with PDP-Laban be allowed to remain as members of the LP, according to outgoing Majority Leader Neptali Gonzales II.

Belmonte noted that this was the same deal that Alvarez had given to other coalition partners, such as the NPC, according to Gonzales.

“This is not uncharted territory. There have been instances in the past when members belonging to the same party were aligned with the minority and majority at the same time,” Gonzales said.

Gonzales said Belmonte had spoken with Alvarez on Monday morning before at least 71 LP members met at the office of the Speaker to discuss a plan to express support for Duterte’s administration and their commitment to back Alvarez as the next Speaker.

Speaking on behalf of Belmonte who declined to talk to the press, Gonzales said the Speaker spoke about the importance of being an ally of the incoming President.

Based on their plan, between 80-90 LP members are expected to join the Coalition for Change with Belmonte, his loyal allies in Quezon City districts and a handful of other LP members sliding down to the minority in the next Congress.

The LP members signed a manifesto supporting Duterte and Alvarez.

Belmonte has not made a commitment to stand as minority leader for the LP in the next Congress, leading to speculation that returning Albay Rep. Edcel Lagman would play the role.

Lagman said returning to his role as minority leader was indeed an option for him.

“But the situation is still fluid. An option hangs until it becomes a choice,” Lagman said in a text message.

By tradition, the loser in the speakership race automatically assumes the mantle of minority leader.

Alvarez’s requirement that LP members joining the coalition swear allegiance to PDP-Laban would decimate the LP.

Several LP members, including those belonging to the Visayas bloc, earlier declared support for the incoming Duterte administration and the speakership bid of Alvarez.

Representatives Francisco Matugas of Surigao del Norte and Franz Alvarez of Palawan, until recently LP members, joined Fariñas and Andaya in the oath-taking as PDP-Laban members.

Fariñas said he was honored to be invited to Duterte’s party.

“With the resounding victory of Mayor Digong, even in my province and district, we have to respect this mandate to lead our country in the next six years and support his (Duterte’s) administration,” he said.

Fariñas, however, refused to comment on what position he would get in the 17th Congress.

PDP-Laban has only three elected members in the 17th Congress—Erik Martinez of  Valenzuela, Jun Papandayan of  Lanao del Sur, and Alvarez—all of whom have little experience in running a committee much less the entire Congress.

Fariñas and Andaya would provide the experience and political savvy for Duterte to ensure that his priority bills—shift to federalism and reimposing the death penalty—would be fast-tracked.

The coalition with PDP-Laban is expected to be formalized within the week, said Capiz Rep. Emmanuel Billones, a close political ally of defeated LP standard-bearer Mar Roxas.

Iloilo City Rep. Jerry Treñas and Billones said they were among the LP lawmakers who attended a meeting led by Belmonte at Batasang Pambansa on Monday morning when the move to join the Coalition for Change was agreed upon.

Treñas said that even with the forging of a coalition with PDP-Laban, it would be up to LP members whether they would join Duterte’s party.

In Western Visayas, an LP bailiwick for the past six years, all 11 congressional district representatives have voiced support for the new administration and Alvarez.