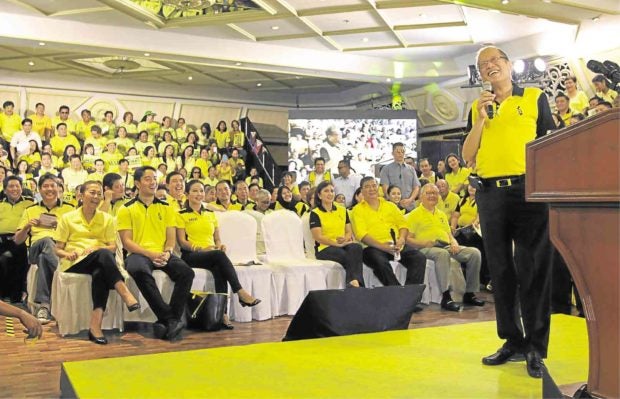 ONLY faint echoes remain of President Aquino’s speech, “Tuloy-Tuloy, Sama-Sama,” at Club Filipino on April 14, as many LP members have decided to join Rodrigo Duterte’s Coalition for Change.

They’re not exactly shedding off their yellow coats, but 80 of the 116 elected Liberal Party (LP) representatives are joining the incoming Duterte administration’s Coalition for Change.

The rest of what was once the bulwark of President Aquino’s daang matuwid (straight path) governance, will be sharply reduced and Speaker Feliciano Belmonte Jr. transformed into the minority leader of the House of Representatives.

Belmonte, who led the House in the 15th and 16th Congress, has conceded the speakership fight to incoming Davao del Norte Rep. Pantaleon Alvarez of PDP-Laban in order to preserve the LP’s status as the single biggest party in Congress.

“I will join the minority, I have no idea how many are joining it,” Belmonte said in a text message to the Inquirer.

“I conferred with Representative Alvarez after I learned that most LP members preferred to join the majority,” he added.

The decision of most LP members to stay with the party while supporting the Coalition for Change was reached at an LP meeting presided over by Belmonte on Thursday at Mario’s restaurant in Quezon City, according to a party member, who asked not to be named as he was not authorized to speak to the media about the matter.

As a bloc, some 80 LP members, about 70 percent of the 116 candidates who ran for a House seat and won under the party in the May 9 elections, were inclined to support Alvarez for the speakership, the source said.

The move would turn most LP representatives, who did not transfer to PDP-Laban, into members of the majority, entitling them to benefits of being a member of the majority, like getting the chairmanship of committees.

The reckoning would come on the morning of July 25, the first State of the Nation Address of Rodrigo “Rody” Duterte as President, when House members would elect the next Speaker, according to the source, who has been invited by Alvarez himself to join PDP-Laban but decided to remain with the LP.

To become the minority leader, Belmonte would have to contest the speakership but he is expected to lose. Most LP members are expected to support Alvarez, so they will be classified as members of the majority.

Belmonte and a small group of LP members who would vote for him in the lopsided battle for speakership would become the LP minority, said an LP member from Luzon.

As a result, the LP would have two blocs—one belonging to the majority and the other to the Belmonte-led minority.

Given that Leni Robredo of the LP is expected to become Vice President, the source said it would be prudent for many lawmakers to remain with the LP as it was not certain whether the tough-talking Duterte would finish his term.

LP members are scheduled to meet today at Belmonte’s office for the drafting and signing of an LP statement supporting the Duterte presidency.

The statement is to be signed by the LP president, Transportation Secretary Joseph Emilio Abaya, a former Cavite representative, and the LP secretary general, Occidental Mindoro Rep. Josephine Sato. Belmonte is expected to sign the statement as witness.

The source said the number of LP members who wanted to vote for Alvarez as a bloc in the speakership battle may still change.

At the meeting today (Monday), LP members are to be asked whether they want to stay with the party of President Aquino, said the lawmaker from Luzon.

Belmonte met with Alvarez at the Speaker’s home last week.

Belmonte said that he was first introduced to Duterte and Alvarez in the 11th Congress and “both of them voted for me for Speaker back then.”

Belmonte met with 92 LP members in a closed-door meeting at the Edsa Shangri-La Hotel in Mandaluyong City on Thursday. It was there that Belmonte learned that the bulk of the LP members were keen on joining the majority rather than the minority.

An Inquirer source said that with 80 LP members joining the ruling coalition, Duterte would have a supermajority in the 17th Congress.

Belmonte explained that LP’s pact with Alvarez would be in the same vein as his deal with the NPC  whose members would join the majority without shifting to PDP-Laban.

Belmonte had an option to join the LP members in the majority coalition but felt it was better for him to serve as minority leader.

By coalescing with the ruling coalition, Belmonte hoped to avoid the same fate suffered by Lakas-CMD in 2010 when it had over 100 members in the 15th Congress but failed to stop the massive exodus to the LP which left the political party of former President Gloria Macapagal-Arroyo with only  a handful of members.

Castelo said Belmonte was only being a “statesman” and “pragmatic” in making this decision.

“His decision would allow his colleagues to get committee chairmanships that would further allow them to grow professionally and enable them to apply their expertise on nagging policy issues besetting the country,” Castelo said.

Among the LP members who have agreed to stay with Belmonte in the minority are Caloocan Rep. Edgar Erice and Quezon City Rep. Alfred Vargas.

Erice said he would remain in the LP in “mind, heart and soul” and stay in the minority to fight against Duterte’s plan to reimpose the death penalty and shift from a unitary to federal form of government.

“I believe that the House needs a vigilant minority that can provide constructive but intelligent checks  to radical changes being proposed by the Duterte administration. Being in the minority will be difficult and lonely but this is the course that I must take towards the path of improving the political consciousness of our people,” Erice said.

“I will support SB wherever he may go,” Vargas said of Belmonte.

The LP campaign spokesperson, Marikina Rep. Miro Quimbo, said the party would hold a meeting today to formalize the party’s strategy in the 17th Congress.

“It will best be done after an exhaustive meeting with all members  present,” said Quimbo.

The LP members who have so far indicated their desire to join Duterte were Representatives  Jerry Treñas, Richard Garin and Arthur Defensor Jr. of Iloilo City; Ben Evardone of Eastern Samar; Lucy Torres-Gomez of Leyte; Rene Relampagos of Bohol; Cesar V. Sarmiento of  Catanduanes; Paolo Javier of  Antique; and Gerard Gullas of Cebu.