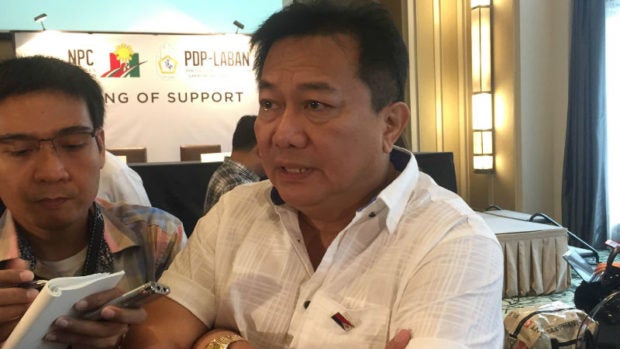 In an interview after the signing of the coalition agreement with Nationalist People’s Coalition (NPC), Alvarez said no less than 50 members of the ruling LP wanted to shift their support to PDP-Laban.

“No less than 50,” Alvarez said when asked how many Liberals would join him.

Alvarez said this would make the party of outgoing President Benigno Aquino III a sure minority in the politically charged House of Representatives, where a super majority is needed to wrest the leadership from incumbent Speaker Feliciano Belmonte Jr. of LP.

Alvarez said he had talked to Belmonte, who said he would support the administration of Duterte.

He also said Belmonte told him he did not have a problem with the PDP-Laban member’s bid for the post, but the outgoing Speaker would still push for his reinstatement.

If Belmonte loses to Alvarez, he will be the minority leader in Congress.

Alvarez said he and Belmonte had a common friend who mediated for a meeting that took place at the Speaker’s house on Thursday.

Belmonte is counting on a hundred Liberal Party members to support his speakership bid.

Alvarez said with half of the Liberals joining PDP-Laban, the ruling party would be reduced to a minority in Congress.

He said as of his latest count, he had 180 lawmakers across party lines on his side, more than the majority of the 290-member House.

Sought for clarification, Belmonte said Liberal Party would opt to join the majority bloc supportive of the speaker bid of Alvarez.

He said he would not want to be part of the minority because he was not sure of who would its members be.

“We talked at my house yesterday. I told him most of the Liberal Party bloc would like to join the majority and support the Duterte administration and him for speaker,” Belmonte said in a text message.

Although still gunning for the post, Belmonte seems to be conceding from the race, saying that with the numbers favorable to Alvarez, Duterte’s pick is sure to be the “next speaker.”

“I’m sure he will be the next speaker,” Belmonte added.

Asked about Alvarez’s claim that as many as 50 Liberals actually plan to support Duterte’s pick for speaker, Belmonte said, “maybe more.”

In a dinner meeting with 90 incoming and incumbent LP lawmakers in Mandaluyong City on Wednesday, Belmonte reportedly said he would still join the race to retain his speaker post.

Duterte is consolidating his forces in the lower House to push for his legislative agenda, which includes the restoration of the death penalty and the amendment of the Constitution by a Constitutional Convention to convert the country’s system of government into federal.

PDP-Laban has only three members in the 17th Congress, coming in as district representatives.

The coalition agreement is seen as a big boost to Alvarez’s bid for the speakership, with NPC being the country’s second biggest political party in Congress with 44 incoming representatives.

Earlier, Nacionalista Party, Lakas-Christian Muslim Democrats, and the party-list bloc aligned with PDP-Laban, bolstering the numbers of their allies.

Alvarez said he is also seeking an alliance with the Makabayan bloc and the National Unity Party. RAM/rga/RC